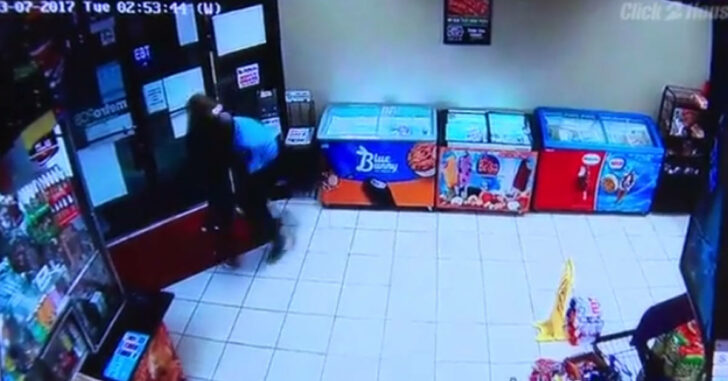 HOUSTON, TEXAS — Around 2 a.m., surveillance footage shows an armed security guard leaning over the counter when a young man enters the shop. The suspect attempted to grab the security guard’s gun and the two entered into a struggle to maintain control over the firearm. The shop clerk was seen racing outside with a high-reach hangar and swinging it over the suspect’s back. Eventually, the suspect disentangles himself and attempts to flee the scene. The security guard drew his handgun and shot the suspect in the leg.

By the time police arrived, according to Click 2 Houston, the suspect was long gone. They are trying to identify him through the surveillance footage but that could be inconclusive.

What if that suspect had gained the upper hand at any point during that struggle?

Now you have an armed, violent suspect and two unarmed people.

This is the price of complacency. In the Marine Corps, they drilled one simple phrase into each of our heads: “complacency kills.”

And it does. The second you drop your guard, let your attention slip, get lazy, that’s when you’re vulnerable. When you have a gun, that mistake can cost you your life.

This security guard seemed to pay no heed to the fact that he had a man walking behind him while he had a gun hanging out of his holster. That mistake nearly cost him and his employer’s life.

Whether it be a concealed carrier or armed security personnel, there is no room to let people invade personal space. Once inside an arm’s reach, that person can act with impunity. All it takes is a couple seconds for a situation to tip upside down. Throw a loaded gun in the mix and life can easily be lost.

A criminal is a predator. You, the law-abiding citizen, are the prey. If any of us forget that situation, we will be rudely reminded when the predator tries to snatch our gun or use one of his own against us.

Situational awareness. Never get bored of scanning your environment. Never get bored of sizing up those people around you. Keep the details of your present surroundings fresh in your mind. It’s not just your life you have to worry about: it’s those around you as well. Your gun can be used against you and against them if you slip up. Don’t slip up. Stay aware of your surroundings at all times.

Previous article: Man Breaks Into Home, Screams, Then Shot By Occupant... And That Was Only The Second Home He Broke Into That Night Next article: 5 Problems Concealed Carriers Face That Other People Don't