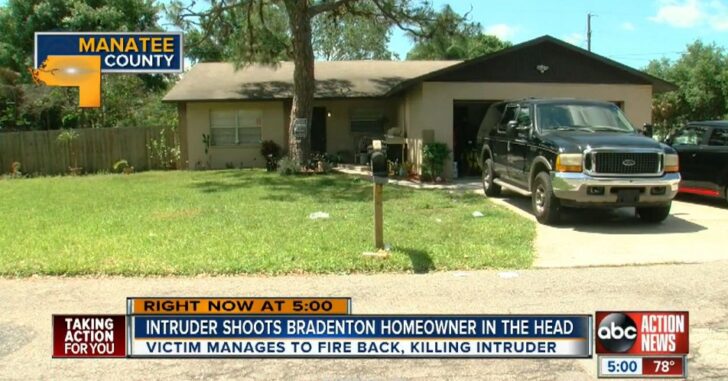 MANATEE COUNTY, FLORIDA — A homeowner proved to be better prepared than the people who invaded his home, leaving one dead and the others fleeing Wednesday night after they broke in and demanded money at gunpoint.

A Manatee County Sheriff’s dispatcher received a 911 call from someone reporting a home invasion robbery and shooting at 704 64th Ave. E in Bradenton. When sheriff’s deputies arrived, they found Perkins (homeowner) and Johnson (intruder) on the ground in the driveway. Both had been shot multiple times.

Initial reports indicated there were three victims in the house when four to five bandits entered the residence holding firearms and demanded money. An argument broke out. Gunfire was exchanged. The bandits ran away.

Police believe the home was targeted, although they aren’t sure why. A further investigation should reveal the motive behind the armed invasion.

Perkins had been shot in the face, but was still somehow able to retrieve a firearm of his own and shoot back. His wife and kids were returning from the store around the same time and when his wife realized what was going on, grabbed a gun of her own and held one of the suspects at gunpoint until police arrived.

Perkins remains in the hospital in serious condition. Police are still searching for two or three other suspects involved.