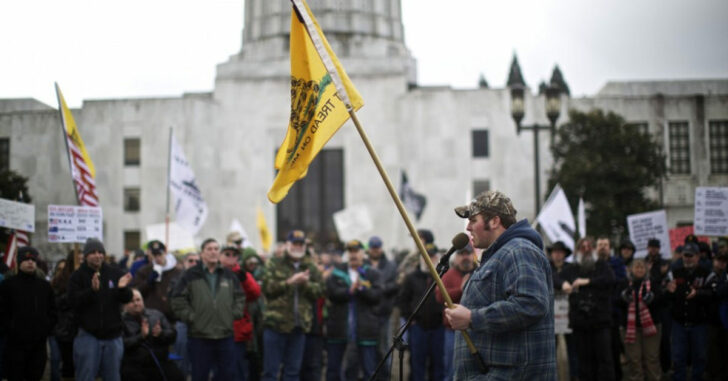 SALEM, OREGON — On January 6th, civil servants and volunteers of the State of Oregon involuntarily ceded their right to self-defense after Gov. Kate Brown’s administrative department quietly enacted a new policy forbidding state employees from carrying firearms at work. State workers that require firearms for their positions are exempt from the new policy.

Only a few days after the policy was enacted, Republican lawmakers in the state began condemning it.

“The governor’s administration has no business confiscating self-defense rights from public servants, volunteers and others, who have committed themselves to serving our state,” Senate Minority Leader Ted Ferrioli, R-John Day, said in a statement.

The policy doesn’t apply to licensed concealed carriers visiting the state buildings and offices. It only applies to the people working within those offices. Gov. Brown’s administration claims the policy change came as a response to employees asking what they were supposed to do if they encountered another employee or volunteer carrying a concealed or openly carried handgun.

“I am extremely concerned to learn that our state government has taken steps that limit employees’ right to self-defense and believe that these actions may violate the Oregon Constitution,” McLane said in a statement.

Rather than ask the state employee in what context raises concern for him, the governor’s administration simply banned law-abiding civil servants from carrying handguns altogether.

It’s a knee-jerk reaction that flies in the face of basic civil liberties.

More importantly, it’s a right that is limited to only state employees. It does not apply to law-abiding citizens and it certainly doesn’t apply to bad guys seeking to hurt or injure others.

This is how civil liberties get eroded away. Basic rights are written into law. When the law revokes those rights, it’s an attempt by authority to subvert the basic foundation of our nation.

The worst part about this case is that the legal system has already ruled in favor of such a policy change. In a recent decision by an Oregon Court of Appeals, the judge ruled that state agencies could forbid their employees from carrying a firearm into the workplace — despite the employee having a valid license to do so. That case, in particular, was over a female teacher who said she needed her gun to potentially defend herself against a violent ex-husband.

Not only was there a clear, demonstrable need for a basic right, there was a clear miscarriage of the justice system to uphold that right.

When any government authority seeks to undermine a person’s right to defend his own life against a threat, the government is wrong and it needs to be corrected.

If it can happen in Oregon, it can happen in other states, too. In fact, quite a few states that are otherwise very liberal in their restrictions on firearms are surprisingly quick to target their own civil servants. In Virginia, neither employees nor citizens are allowed to carry concealed in public buildings. This was passed by an executive motion by Gov. McAuliff.

For Oregon civil servants and their family members, the best recourse is to contact your state representation. This is the branch of government that is supposed to act as a basic check-and-balance to the judicial and executive branches when they run afoul of both the spirit and letter of the law.

For concealed carriers everywhere, let this be a wake-up call. Just like we have to fight complacency in our everyday carry of a concealed handgun, we also have to be equally diligent to ensure our rights are not unduly restricted. If you see something like this pop up in your state, let us know. The more aware we are, the better we can combat such aggressive breaches of the rights of law-abiding Americans.