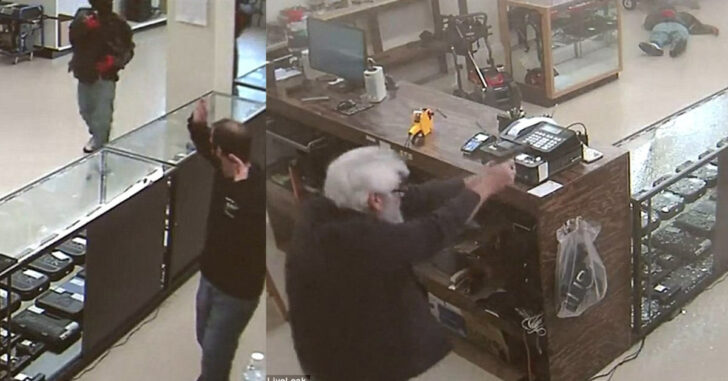 MABLETON, GEORGIA — Back in December, we wrote about an owner of a gun shop fighting back against two armed robbers that tried to rob the store. Now, we have video showing exactly what the gun shop owner did. It’s a harrowing account of what actually happens when law-abiding store owners are forced to fight back against armed intruders.

Our original article covering the story can be found here.

via the Daily Mail

Now it’s one thing to try to rob a convenience store where the clerk may or may not be armed, it’s a whole other level of stupid to try to rob a gun store. And in rural Georgia, most gun owners know that when seconds count, having a gun ready to go can be the difference between life and death.

“I’ve been doing this 30 years. Nothing like this has ever happened. I never wanted this to happen but I want to go home at night, too.”

He certainly never anticipated having to use a gun to defend his life and that of his coworker but this gun store owner certainly wasn’t given much of a choice.

The two men that walked into that store came in with guns drawn and pointed at the owner and the employee. That’s a fight for survival right there. More importantly, if those guys got away with a boat load of guns, you know they’d go on to use them to commit even worse crimes against other law-abiding folk.

There’s not a law-abiding gun owner that ever looks forward to that sort of life-or-death situation. When it happens, that gun in your holster may just be the thing that tips the balance back into your favor.

We’re glad both of these guys made it out alright. Carry everywhere, everyday. You don’t need to be the owner of a gun shop to get stuck in the line of fire of bad guys.