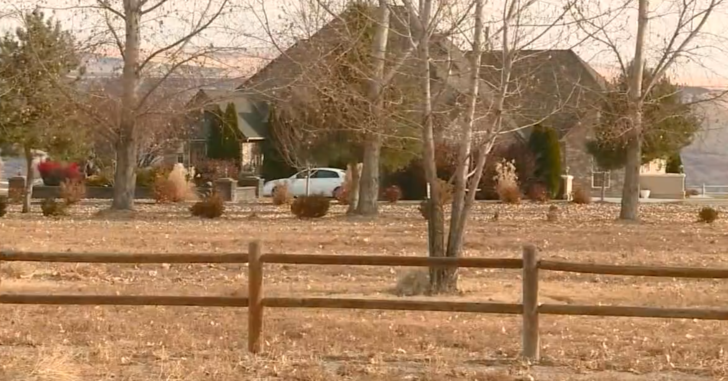 MARSING, IDAHO — The full story of this incident is too bizarre and complicated to try and fully explain here in a concise manner. It is a gruesome story that has left police baffled as they try to unravel the surreal series of events.

Thomson told deputies that the unknown man – identified as Warner – had charged at her and St. Clair swinging a long, shiny object. The weapon was later determined to be a flail –  a medieval-style weapon comprised of a two-pound spiky metal ball on a rope.

Thomson said both she and St. Clair were armed, and that she shot at the man who was running at them, but he did not stop. Warner hit St. Clair with the flail, according to court documents, continuing to attack him as Thomson fired.

Thomson said the attacker grabbed onto St. Clair and turned him in her direction “as to use Rod as a shield from being shot.” At the same time, Thomson said, she fired her gun, and believed the bullet struck St. Clair.

The farmer, St. Clair, had called the police earlier because of some strange activity going on at his property. Deputies were on scene and had just left the house when the attack occurred. The deputies quickly returned when they heard the shots being fired.

We encourage you to watch the video at the linked source to get a full understanding off all the strange events leading up to, and after the attack. As mentioned earlier, police are still trying to understand all of the things that happened, and how they are connected.

Previous article: Range Instructor's Leg Amputated After Being Shot At Range By Student, And The Man Who Rented The Gun Is A Felon Next article: [FIREARM REVIEW] Canik TP9 Elite SC