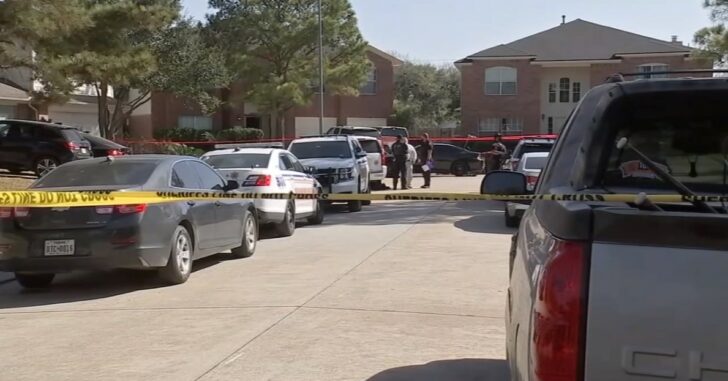 CYPRESS, TEXAS – A man was shot at, handcuffed, and beaten inside his home by overzealous bounty hunters and in the presence of his family. The Sheriff’s office is calling it a case of mistaken identity and unlawful actions.

Ricky Brannon arrived at his home around 8 a.m. Sunday morning when three men jumped out of their vehicle with guns drawn and started shooting. Brannon ran in the house and tried to close the door, but the men forced their way in. When the men busted through the door and began shooting inside the house, the homeowner retrieved his gun from a closet and returned fire.

In the chaos, his wife, Tekia Thompson told the men that there were kids in the home. She tried to get the kids out but was ordered to the floor by the men. “He told us to get on the floor or he was gonna shoot us,” said Thompson. “I was trying to tell him, ‘What’s going on? Who are you? I have kids in the house. I have babies in here.’

One of the men claimed to be a law enforcement officer, causing Brannon to stop firing and surrender to them. “So I put my gun down. I said, ‘Look, I’m coming out,” and I came out. The threw the cuffs on me, and they started whaling on me,” Brannon said. After being beaten and hit in the head with a gun, he was dragged outside were responding Sheriff’s deputies were arriving.

Texas State law does not give bounty hunters the authority to enter a home without permission of the occupants, nor can they wear, carry, or display any uniform badge that implies that they are a law enforcement officer or federal agent.

According to the Harris County Sheriff’s Office, it appears to be a case of mistaken identity. Investigators say that the trio was looking for a man who no longer lived at that address. Mr. Harris and his family moved in two years ago. “I thought we were getting robbed. I thought they was gonna kill me,” said Brannon reflecting on the incident.

The men were charged with burglary and felony after entry. The name of the men, or the bail bond company which they were working for was not released.

Previous article: Armed Mom Shoots Intruder Forcing His Way into Her Home, Saving Herself And 8-Year-Old Child Next article: Homeowner Charged with Murder After Killing and Wounding Alleged Intruders Inside His Home