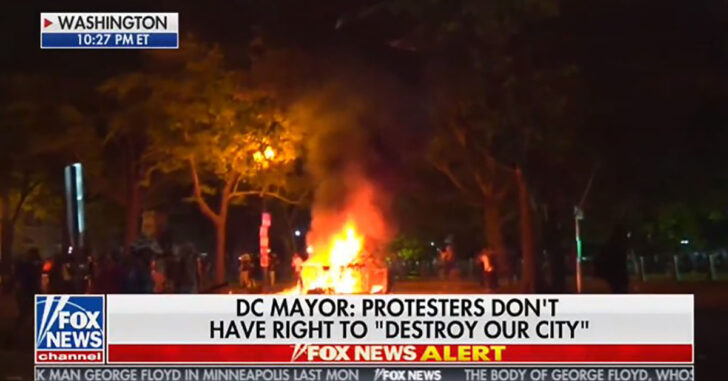 WASHINGTON, DC — Sunday night is proving to be a challenging one for cities across the Country, and the Country’s Capital is seeing it’s share of violence due to riots breaking out.

Sources told Fox News that over 50 Secret Service officers have been injured in Washington tonight, and fears of serious attacks are very real.

As observed in New York City and elsewhere, groups in D.C. are planting cars filled with incendiary materials for future use, Fox News is told.

Protesters rioters have been reportedly throwing bottles and Molotov cocktails, likely contributing to the injuries.

A historic church, directly across the street from the White House, has been set on fire. St. John’s Episcopal Church is said to be the go-to location for Presidential prayer since the early 1800s.

Antifa is burning down the historic St. John's Church by the White House. It's completely up in flames. pic.twitter.com/VI0A2PAVBV

Multiple fires have been set near the White House, and at least one vehicle overturned.

It is believed that President Trump has been taken to an underground bunker, however the White House does not comment on security policy and protocols.

Earlier this evening, reports of Antifa members making their way to DC were circulating, and the FBI even issued an alert to the Minnesota National Guard that warned them about credible and lethal threats.