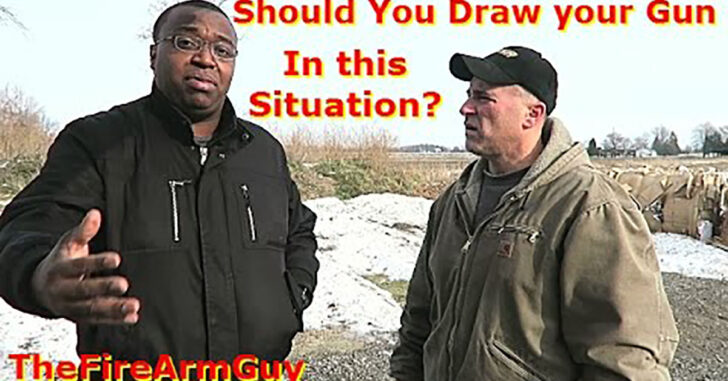 One of the main issues when carrying a gun is trying to figure out what is appropriate when faced with a dangerous situation. One’s perception of danger may be different than another’s perception however the bottom line is that we all need to walk away from the situation alive. The question explored in this interview is, “Should You Draw Your Gun if Two Unarmed Guys Attack?” Is “Disparity of Force” reason enough to draw your gun?

Instead of trying to figure this situation out on my own, I decided to seek the wisdom of Vincent Jackson who is in law enforcement and also a firearms training instructor. I met Vincent a couple years ago when I took his “Defensive Pistol” training class and learned several handgun skills as well as the concept that every self defense setting is “Situational Dependant.” We carry a gun for a reason and should not be afraid to use it if our life is in danger.

We as concealed carriers, need to understand that any situation we find ourselves is a “gun related incident” because we have a gun on us. Therefore, preparation, training, situational awareness and knowing your state’s laws are of key importance when any defensive situation arises. If two unarmed guys were to aggressively attack, and we used our firearm to protect ourselves, we would have to justify that disparity of force (two against one) created a setting where we feared for our life. The decision to draw a gun in this scenario depends on your perceived notion of the threat. Watch the video to hear Vincent’s advice and let us know if you agree.

Previous article: Sig Sauer P320: The Army Is Considering It But What Does It Change For Everyday Carriers? Next article: The Grey Man Concept and Clothing Choice