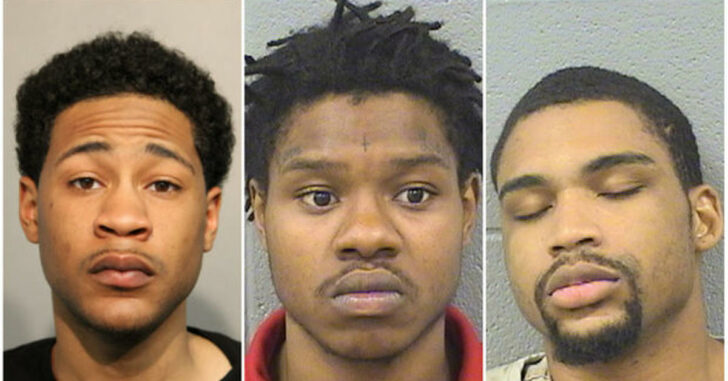 CHICAGO, ILLINOIS — In a previous article, we talked about a Chicago store clerk who bravely defended himself against two armed criminals. Two of the criminals were wounded with non-life-threatening gunshot wounds and a third has been implicated alongside them. Now, they’ll all face a jury. Doesn’t pay to target clerks, does it?

According to DNAinfo, the three criminals are Stephon Kinchen, 18, Anthony Simpkins-McDonald, 21, and Neil Thomas, 24. One of them was hit in the right forearm and another in the shoulder. Both were taken in for treatment for their injuries before getting taken into a cell. Their buddy, apparently, got tagged along for the ride.

Now the two main suspects in the case, Thomas and Kinchen, were given slightly less than a million dollar bail while their accomplice, Simpkins, only got a quarter million dollar bail set for him. They were all charged with two felony counts of attempted robbery with a deadly weapon.

Being an accomplice really doesn’t minimize your exposure to criminal charges now does it?

As for the clerk, he managed to escape from that situation without any serious harm. If you recall our write-up on that event, both Kinchen and Thomas roughed him up a bit before he was able to draw his handgun and shoot both of them.

As we’re always quick to point out — if you’re a clerk, you’re either armed or you’re a sitting duck. That’s a hard enough job without having to worry if you make it home in one piece. As a customer walking into a convenience store or gas station store, you’re just as well served by carrying your handgun as well. If anything, we’d love to report on a story of too many people being prepared than not enough.

It can happen in a dangerous part of town, it can happen in the most peaceful suburb in America. Bad guys can strike anywhere, any time. That’s why we keep reinforcing the basics: situational awareness, defensive mindset, and carrying your handgun everywhere you go.