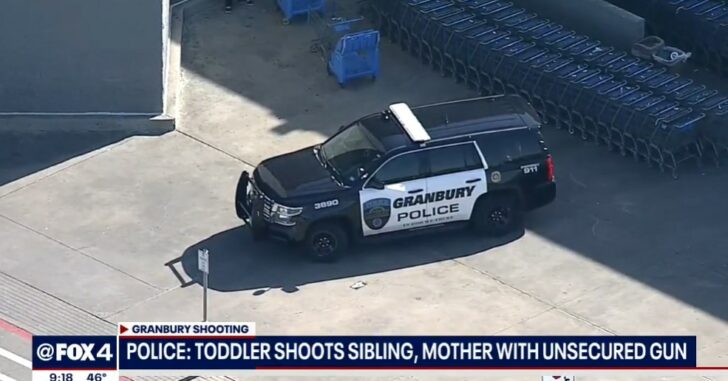 GRANBURY, TEXAS – A mother and one of her children were shot by her other child in a Walmart parking lot just before 11:30 a.m. Wednesday. Police say it happened near the store’s auto center.

They were told by witnesses that a couple was outside of their vehicle, while their children, ages 1 and 2, were in the vehicle. Investigators have determined that the 2-year-old got ahold of a handgun that was between the seat and center console. The gun discharged, and the bullet went through the 2-year-old’s leg, through the mother’s arm and into her chest area.

Both victims were transported to a Fort Worth hospital for treatment of their wounds. The mother was taken by helicopter due to the severity of her injuries, and her current condition has not been released. The child’s injuries are not believed to be life threatening. Police have not commented on any possible charges against the parents.

There are so many things wrong with this. A firearm should never be left unsecured in a vehicle, especially a vehicle used to transport children or anyone else who is not educated in gun safety. A gun that is not properly holstered and carried on one’s person, or properly secured in a vehicle mounted gun safe, is a safety hazard.

In an accident, it can become a projectile inside the vehicle and injure the occupants. It can be ejected from the vehicle and found by children, criminals or others that should not have access to it. It can also easily be stolen and used in future crimes.

And sadly as proven here, it can be grabbed by tiny hands and fired. Had the bullet struck the sibling in the head or torso, this story would be even more tragic. This is only one of several incidents this week where minors have obtained and discharged firearms injuring either themselves or others.

Previous article: One Killed and One Charged with Murder in Altercation over Debt Collection Next article: Man Defends Family With His Firearm Against Armed Attacker In Walmart Parking Lot