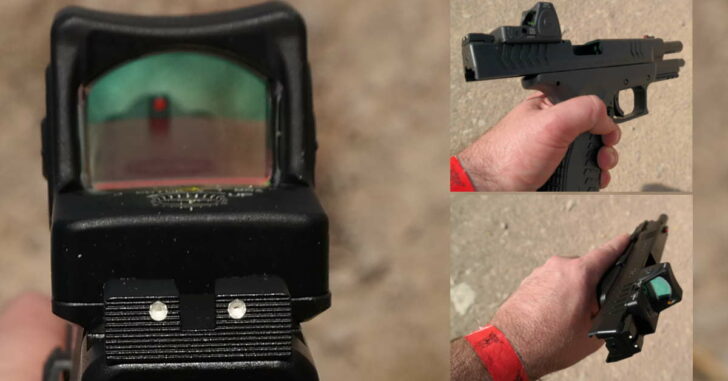 The Glock MOS system was released earlier this year in time for Shot Show 2016 in Las Vegas, Nevada. For a gun industry that, has at this point, seen and done it all, Glock managed to turn a few heads by including an optics assembly right into the upper receiver of a good number of their pistols. I got to shoot one last year before the Texas Firearms Festival and I can honestly say, it’s a joy to fire.

Earlier in October, I was invited out to Las Vegas by Springfield Armory to test out their new SAINT firearm. Myself and about fifteen other gun writers from across the industry were invited. Before we put the SAINT through its paces, we were given a chance to fire the Springfield XD(M) OPS 9mm.

This particular outdoor test range at the Pro Gun Club was set to something like 10 yards. I’m estimating because they didn’t have distance markers but I knew that it was fairly close but not ridiculously close.

The first trial run included just basic familiarization. The optics used by the Springfield XD(M) OPS 4.5″ 9mm was the Vortex® Venom red dot sight. It was adjustable for intensity and definitely centered on target right out of the case. Keep in mind, the last time I fired with a red dot assembly on a handgun was probably a year ago with the Glock MOS 17. I hadn’t done any reaction drills with that Glock. I just fired it at a steel target roughly 8 yards away. As I recalled, it was very “point and click”.

He was kind enough to field questions about his secret to speed shooting.

I had no illusions that I would magically be all centered on target — even at 10 yards.

My first impression? The Vortex® Venom red dot sight is a fantastic addition to this handgun. But, it does not equate to being any more proficient with the gun straight out of the box. At approximately 10 yards, all my shots were center of mass and it took me only fractions of a second more to find the dot and put the round on target. If I had picked up that Springfield XD(M) OPS for the very first time in my life and needed to use it to defend myself that instant, I felt I would have been worse off than if I used a gun I trained with.

Why? Because red dot sights take time to get used to. And if you’ve never used a red dot in training, it’s going to take longer to get used to it.

When I did start to get used to it, I found it was extremely helpful.

Rob was quick to point out that using the red dot as an excuse was not an excuse. There were fifteen other gun writers out there on the range with me and I was sure they’d all draw their own impressions from the exercise. As for me, it took me more time to find the red dot than it would take me to align iron sights. The red dot initially acted as a detractor to my first impressions.

Granted, I’ve used iron sights my entire life. From qualification courses in the M16, M249, M240B and M9 to fulfilling qualification standards for the civilian sector in the Glock 17 and M4 through Golden Seal Enterprises, it’s been nothing but iron sights. I’m not a competitive shooter. I’d barely classify myself as anything more than a semi-decent marksman. I still depend on my knowledge and proficiency with a firearm in order to protect myself in an emergency situation.

In that instant, I knew that despite the ease of use of a red dot system, I was not going to be faster with it… Nor an advocate of it.

Was I going to be the one guy to go kicking and screaming into the future? Hardly.

We won’t all draw the same conclusions from using a red dot sight system. There’s nothing wrong with the Springfield XD(M) or the OPS version with the Vortex Venom. It’s a beautiful gun that I could see it being useful to a great number of people in a defensive situation. I personally grappled with envisioning it as my personal concealed carry or open carry choice.

This Springfield Armory XD(M) OPS – 4.5″ semi-automatic handgun features the Vortex Venom red dot sight assembly. It is chambered in 9x19mm and has a great full-size height of 5.75″ and a slim width of 1.18″. The stainless steel barrel is 4.5″ in length and has a 1:10 twist in the barrel.

It comes with two 19-round magazines with the option for a 10-round CA-compliant version.

Would I recommend this as an everyday open carry gun? Absolutely. Magazine capacity and the seamlessly smooth operation of this pistol leaves no doubt in my mind that if I was willing to drop a grand on a great pistol, this would be the one. If I ever trained with a red dot system on a pistol and became a disciple, I would buy this pistol.

Will I buy this pistol? No. I don’t trust guns that run on batteries. Go pick up a copy of the November issue of Guns Digest or Guns & Ammo if you want the other angle.