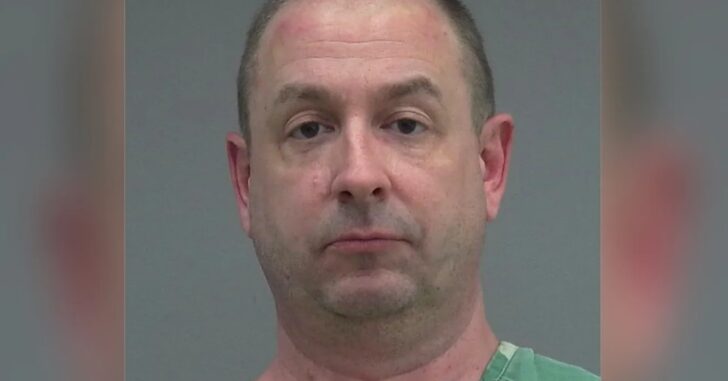 GAINESVILLE, FLORIDA — A man is facing charges after police say he shot someone in the back as they were retreating after being caught breaking into a vehicle.

Chad Edward Locke, 51, called 911 after shooting the 16-year-old suspect he saw burglarizing a neighbor’s car outside his Gainesville home at about 2 a.m. Monday, according to the Alachua County Sheriff’s Office.

Locke told police that he was “watching television and monitoring his exterior surveillance cameras” when he saw someone trying to break into his neighbor’s car across the street.

So like any irresponsibly armed citizen, Locke grabs his gun from the… garage?… and goes outside. He yells to the suspect from his driveway just to make sure it wasn’t his neighbor.

The teen turned toward Locke while holding a flashlight and possibly dropped something, leaving the homeowner unsure if the burglary suspect had “some sort of weapon,” according to the arrest report.

Locke chambered a round in his handgun as the teen suspect started walking away, and told deputies he was “momentarily distracted” while making sure the suspected burglar was alone, deputies said.

The teen then stopped and directed his flashlight back at Locke, at which point Locke says he opened fire, telling police he thought the teen was “possibly going to come toward him.”

He shot the suspected burglar in the back, who is currently in the hospital and unable to provide a statement because of his condition.

Locke told police that he was fearful the teen would come after him, but it doesn’t sound like police buy the story, according to the report.

“However, based on [Locke’s] post Miranda statement, [the teen] never made overt or hostile actions or statement towards him to put him in a well-founded fear,” deputies wrote.

I can’t be certain as to how many articles I’ve written over the years that discuss shooting at a fleeing suspect, and also about not going after people breaking into things that aren’t your home. If you’re inside and safe, stay there and call police.

Locke may or may not face the charges to the end, but it’s pretty clear to me that his actions were not the actions of a responsibly armed citizen.

Your firearm is for life or death situations. It’s not for protecting your neighbor’s car.

Previous article: Man Leaves 13 Guns And Lots Of Ammo In Vehicle Overnight While Staying At Hotel, And Everything Was Stolen Next article: Concealed Carrier In AZ Defends Against Armed Robbery Attempt At Cell Phone Store