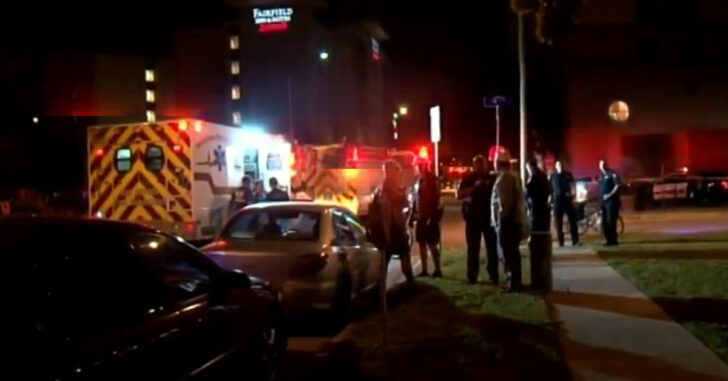 SAN ANTONIO, TEXAS — As a concert let out and concert-goers were returning to their vehicles, a lone man fired his gun into the air. People panicked and took cover. One armed citizen amongst them pulled his own firearm and asked for the man to lower his gun. The man refused and when the concealed carrier felt threatened, he fired and hit the man in the arm.

That suspect was evacuated to a nearby medical facility where he received treatment for his wound and then was promptly charged with possessing a firearm he should not have had. He was also charged with deadly conduct. According to FOX News San Antonio, the man firing rounds listlessly was also a prior convicted felon.

He should not have been in possession of a firearm.

His actions put in danger all those around him and he did so with blatant disregard for the safety and well-being of others. If not for the happenstance of a concealed carrier, he may have gone on to do more direct violence against random concert-goers.

Thank goodness one man, legally armed with a gun, decided to take action. His actions proved pivotal in the defense of countless others who were hoping but merely to return from whence they came.

That’s all it takes – one law-abiding citizen with a gun.

But, that’s also only what it takes – one jerk with a gun who shouldn’t have one.

Ask yourself, would you rather be the good guy or be subject to the bad guy?

That’s a choice an everyday concealed carrier makes. He chooses to carry on his person, at all times, and ensure his own defense and that of those around him. It’s a difficult choice. You have to choose to stay about your wits and maintain situational awareness. You have to choose to identify the threat and engage when necessary.

It’s not something any concealed carrier earnestly looks forward to — it’s just what he does.

Thank goodness there was one person who would.

Will you be that next person?

Previous article: #DIGTHERIG - Ward and his Beretta PX4 in a Blackhawk Holster Next article: [REVIEW] Blue Alpha Gear's EDC Belt Features A Hybrid Cobra Buckle -- Where Has This Been My Whole Life?!