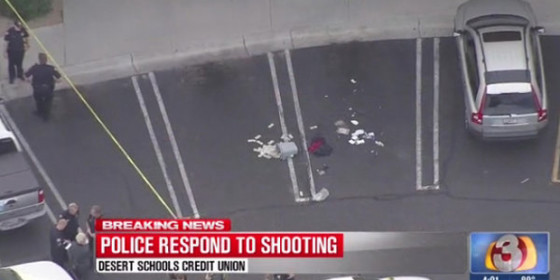 One bank robber is dead and the other injured after a witness drew his firearm and took matters into his own hands. As the two were trying to leave…

Two masked, armed men reportedly robbed a Desert Schools Federal Credit Union near Cactus Road and Tatum Boulevard and were confronted by a witness while leaving with a garbage can full of money.

One of the masked men was killed, and the other injured after he carjacked a victim in the parking lot outside and then crashed the vehicle into a house a short time later. He was then taken into custody by police.

So the question remains; assuming that this man did ‘confront’ the robbers, would you have done the same thing? We have no knowledge as to whether the armed citizen knew if they were armed or not, but what would have to happen for you to engage?

If the robbers are making a clear shot for the exit after the robbery, do you intervene?