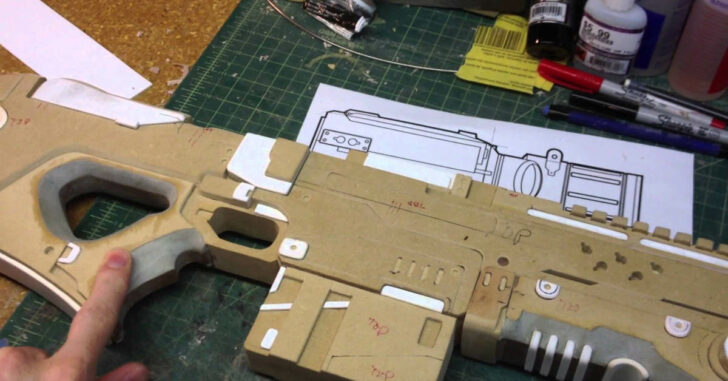 Halloween. That time of the year you get to see just how disgusting that coworker can look in an undead nurse’s outfit. It’s also an excuse for adults to get together and dress as whatever their id secretly desires.

Jokes aside, Halloween is a great fun time held by both children and adults. For children, it’s an excuse to get free candy. But plenty of inspiration for decent costumes comes with a need for prop weaponry or guns.

In this article, we’ll try to outline our best suggestions when it comes to ensuring you dress appropriately.

A real gun is not a prop. It is a tool you use to defend your life. Do not use a real gun as a prop… Especially if alcohol or other mind-altering substances will be consumed.

If you do not plan on drinking or consuming anything that will impair your judgement, feel free to keep your handgun concealed. In fact, it may even be a good thing that you’re a concealed carrier. But do not use that gun as a prop device in your costume.

The best rules we can come up with for fake guns are reduced to two basic components:

If the fake gun has functioning mechanics (i.e. you can rack the slide to the rear or it has an open barrel) it should have the following:

If you’re stuck working security at a shin-dig, you should always inspect every fake gun as it comes in through the door to ensure that it could never be confused for a real one. If it could be because of either mechanics or design, make sure it is permanently decommissioned prior to being used as a prop at an event. Additionally, we recommend that all prop melee weapons and firearms be anchored to their respective holsters by either a zip-tie or other device which will be permanently broken if tampered with.

This is the best way you can safely know that the props being used as costume pieces will not pose an undue risk to other people at the event.

While we were researching this article, we found it helpful (and strangely educational) to go through cosplay and anime convention rules and regulations concerning fake weapon props. As you may or may not know, grown adults dress up as their favorite fictional cartoon characters and attend conventions. Those costumes often include fake props. As many conventions have strict no gun policies, they have to check incoming attendees for actual firearms and melee weapons. This requires them to come up with regulations dictating where the cut-off exists.

How Some Anime Conventions Dictate ‘Real’ Versus ‘Fake’ Weapon Props

Everything can be a potential weapon in the right (or wrong) circumstances. The best rule is to simply not be an idiot but we’ve found that’s extremely hard to legislate.

At anime and cosplay events, organizations are responsible for checking and clearing all props entered into the event. This is a process called ‘peace bonding’. It requires certifying that the prop is indeed not usable as a conventional firearm or melee weapon.

We’ve directly referenced one Anime Expo’s rules and regulations to give an idea of what they would generally allow in through the door. While that’s just one private organization, we’ve struck through lines that are not relevant to give an idea of conventions commonly adopted by events that typically have fake weapons filtering in through the door.

If a prop weapon is, or was, at any time capable of firing anything, it must be rendered permanently inoperable in order to qualify for Peace Bonding. You can do this by, for example, permanently plugging the barrel with glue, caulk, or any non-removable substance. You must be able to prove that the gun is permanently decommissioned upon inspection. Bring tools if necessary.

In addition, to be Peace Bonded, your weapon must meet the following criteria:

CONCEALED NATION EDITORIAL NOTE: Anchoring bladed weapons in their sheath is not a bad idea to demonstrate that they cannot be readily used as a cutting implement.

CONCEALED NATION EDITORIAL NOTE: Blunted arrows are potentially as dangerous as bladed ones. In fact, when hunting small game like rabbits or squirrels, a blunted-tip arrow can be extremely effective.

If your prop weapon looks realistic, then federal law requires that it either be translucent enough to see inside, or be at least half covered with solid white or bright red, orange, yellow, green, blue, pink, or purple. 15 CFR § 1150.3.

As we can see, cos-players and anime conventions are just a limited source of wisdom when it comes to checking weapons or guns for a dangerous capacity.

Federal regulations also have very limited reach when it comes to marking props.

It shall be unlawful for any person to manufacture, enter into commerce, ship, transport, or receive any toy, look-alike, or imitation firearm unless such firearm contains, or has affixed to it, a marking approved by the Secretary of Commerce, as provided in subsection (b).

Looking at pictures of fake guns, we’re pretty sure you’d have to use a magnifying glass to check for those signs.

Have a happy Halloween and be safe out there!

Previous article: Man Pulls Knife On Off-Duty Officer Who Saw Him Flee From Grizzly Crash Next article: Teens Violently Rob Man Trying To Sell An Xbox... He's Able To Shoot The Teen Who Shot At Him