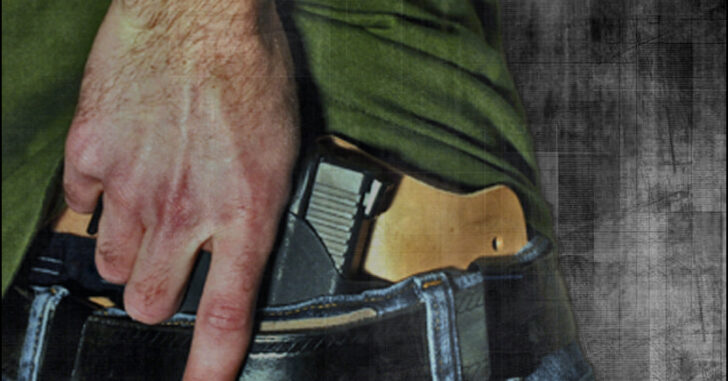 Those of us that carry a gun every day willingly as citizens tend to be gun people. There are over fourteen million concealed carry permits at the time of this writing in the United States, but sadly very few carry the gun every day. Even those in professions that require the carry of a gun such as law enforcement and military contain a majority of personnel that are not at all dedicated shooters even though they carry the tool as part of their career. So, those of us that do take shooting and training seriously tend to like to shoot for the sake of shooting and we like all things related to firearms. We favor this particular tool and we understand the capabilities. As such the gun community tends to focus on, you guessed it, the gun.

I find among concealed carriers a trend that disturbs me and that is the over-reliance on the singular tool. This is NOT a suggestion that gun carriers are out looking for trouble and hoping to get into gun fights. The statistics clearly demonstrate that legal concealed carriers are the most law abiding citizens in the nation. Also, this is NOT a rant suggesting that most concealed carriers are totally unprepared. Those of us that choose to carry a firearm are well ahead of the pack in defensive ability, and usually in the associated mindset. Rather, I just want to point out a complacency that many carriers develop regarding their reliance on only the handgun as their form of self-protection. This tends to contribute to a neglect of other skills that are very important for any individual that wants to remain ready for the dangers of this world. Following is an outline of the skills that I find often neglected among many of us and these are worth consideration as we should all strive to ever enhance our capabilities.

I see a lot of gun guys and gals that are quite portly. I am not pointing fingers here, I have been rather round at certain points in my life as well, and I still work at staying in shape as it does not come natural to an individual that is rather undisciplined in eating habits. The truth is, staying fit underpins every pursuit in life, not just your ability to defend yourself, but here we are speaking to it from that angle since that is our current topic of consideration. When I see shooters diligently practice with their weapons but are so out of shape that they can’t possibly run 100 yards without keeling over, I have to question their priorities. It should go without saying that people who are truly de-conditioned face a far greater danger from heart disease and other health issues then they face from criminal attack, so that should be incentive alone.

Going beyond the obvious life dangers of being completely out of shape and staying “tactical” in this discussion I would like to point out that there is a lot more involved in being able to protect yourself and your loved ones then just having the skills to shoot people in the face. Can you run at a dead sprint for 200 yards without dying? Could you do that while carrying your small children? Can you pick up the table in a restaurant and throw it through the window so that you and your loved ones can escape a bad situation? Can you last beyond a few seconds in a contact distance fight with an opponent? Can you drag someone through a car window to get them clear of ensuing flames following a wreck? Can you pull your own body weight up and over a wall? Fighting is a very physical event whether fighting men or fighting other adversity or crisis. If you are a heart attack waiting to happen yet you hit the range every weekend then you need to get your priorities straight. Keep hitting the range, but you need to be hitting the gym several days a week as well or you are fooling yourself.

Can you fight with your hands? If not you need to learn how. You don’t need to join a formal martial arts program (most are a waste of time anyway when it comes to realistic skills) but you should take some basic combatives training. You should test these skills out with live training partners and you should work your striking skills on heavy bags. Even as a dedicated shooter there may be times and places that you can’t be armed. Your hands and feet will always be your first or final line of defense. Even when armed, some fights start as fist fights or at contact distance and combatives can play a huge role in your ability to even deploy the gun should you need to. Hand-to-hand skills are important for the armed citizen.

I bet you carry a knife, but do you train with it to use as a weapon should you need to? I admit that I am hardly a knife guy and it is not a tool that factors prominently into my defensive tool set. However, I do carry a knife every day since it is essential to carry a cutting tool and thus I consider it a backup to my firearm should things go really bad. Some basic knife skills are warranted, probably most critical of all is the ability to deploy the knife quickly. How about less-lethal tools such as OC spray for use in confrontations that do not call for a lethal response, or for times when only such weaponry is available? A command of tools such as tactical pens and other impact weapons can provide a great advantage over just empty hands should you need to spend time in places in which you can’t go armed with a gun or even a blade. Having some skill with weaponry beyond the gun is a sound tactic as you never know what will be available to you in a critical situation where you have no firearm or simply can’t deploy it.

I have become a true believer in carrying medical gear on one’s person and, more importantly, acquiring the skills to use it. It is worth getting some training in emergency trauma care so that you know how to stop major bleeding. Carrying a tourniquet and hemostatic agent and knowing how to use them is a sound investment of time and resources. This skill set and gear is more likely to be used to address emergencies that are not at all related to self-defense and I think carrying the ability to plug holes is important. Traumatic blood loss is the biggest killer in the wake of accidents, as well as shootings or other criminal attacks. Knowing how to keep somebody alive long enough to make it to medical care is a very important skill that may save lives more often than your firearms skill ever will.

Knowing how to handle a vehicle safely and effectively in times of crisis is of great importance. In this age of ever increasing social clashing and hostility where angry mobs congregate, knowing how to maneuver a vehicle to avoid or escape such an environment is worth some research. Understanding how to push other vehicles out of the way with your own vehicle, as well as having a good command of vehicle fighting tactics is warranted. Also developing the habits of simply driving defensively and cautiously is of great importance. Beyond just being cautious of other motorists and obstacles, you should develop the habit of leaving plenty of space between your vehicle and the one in front of you so that you always provide yourself a means of escape. When you are driving you are steering a 4,000 pound missile that may prove more effective at getting you to safety than anything else.

The vast majority of confrontations do not warrant shooting people and knowing how to de-escalate a situation goes a long way towards preventing a situation from going there. De-escalation does not mean failing to take action against a truly violent threat, it means containing a heated situation so that it does not become a violent situation. Do some research and give some consideration into the proper way to deal with hostile encounters and learn some “verbal judo” that can be used to de-escalate. Also, learn how to challenge a potential threat so that you can effectively use a command voice to show that you are not a waiting victim, and also program yourself to use vocabulary that will make it clear to any potential witnesses that you are defending yourself, not inciting a confrontation.

This final category is not really a physical skill but it is part of your intellectual knowledge base and I mention it here because it is critically important and often absent among many gun enthusiasts, even some of those that carry. If you go armed you need to be well educated in the laws of lethal force as they apply in your jurisdiction. Know exactly what constitutes a serious threat as opposed to just more common social hostility. Understand the principles of ability, opportunity, and jeopardy, and understand the difference between neutralizing a threat and using excessive force. Understand what constitutes disparity of force. Also, you should spend some time educating yourself about criminal behavior so that you better understand the criminal threat. Are you familiar with the crime trends in your area? Do you have an idea of what to be looking for and how criminals act when they approach an intended victim? Understanding this enemy is an important part of being prepared for him.

So, there are some other important skills for you to think about and be sure to consider focusing on any of these areas that may be lacking. Being able to protect yourself and those you love goes beyond shooting and gun handling. Become the whole package. Do you have any other good advice for skills that we should all be working on? Share it with us.

Previous article: #DIGTHERIG - This Guy and his Glock 29 in an Alien Gear Holster Next article: [CCW IN ACTION] Robber Gets Shot Mugging Concealed Carrier