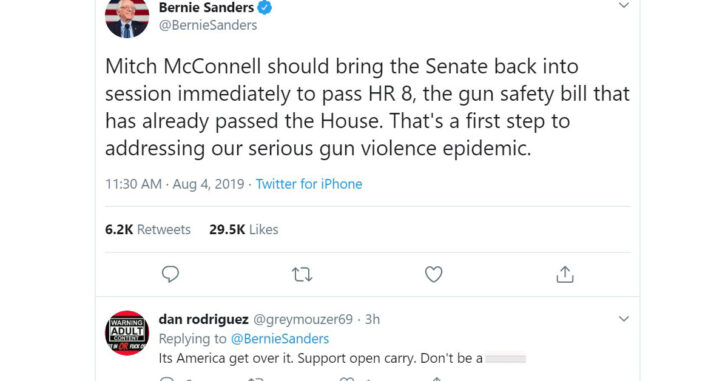 Calls for the Senate’s recess to be cancelled are being made by some Democrats, so that they can get back to business on H.R.8, a bill that would expand background checks for individuals purchasing firearms.

Senate Minority Leader Chuck Schumer seemed to be the first to call for the Senate getting back early, saying;

One awful event after another. Leader McConnell must call the Senate back for an emergency session to put the House-passed universal background checks legislation on the Senate floor for debate and a vote immediately.

Mitch McConnell should bring the Senate back into session immediately to pass HR 8, the gun safety bill that has already passed the House. That's a first step to addressing our serious gun violence epidemic.

While we don’t have the details yet on the Dayton, Ohio shootings, we do know that the suspect in the El Paso shootings had purchased the firearm used by legal means. An extended background check process would have likely not changed a thing.

I’m all for trying to be proactive with stopping the next incident, but saying that more laws are going to stop a crazy, hate-filled person with no criminal or mental health background, is just insane.

Previous article: Would You Be Ready For A Threat Like This? Next article: [VIDEO] Armed Off-Duty Soldier Credited With Saving Numerous Kids During El Paso Mass Shooting