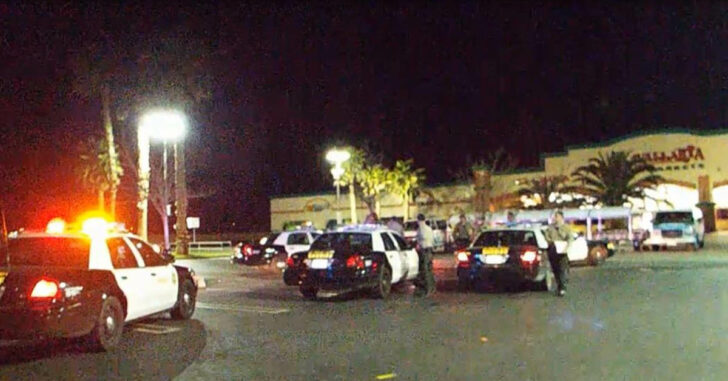 PALMDALE, CALIFORNIA — An armed security guard shot a thief in the leg at a supermarket after the thief pulled out a knife. The security team became aware that there may be a theft-in-progress and dispatched a guard to check it out. As he approached the suspect, the suspect drew his knife. This took it from a likely simple petty theft into armed robbery.

According to the Los Angeles County Sheriff’s Palmdale Station, the suspect was shot in the legs and managed to flee on foot. Deputies established a perimeter and swept him up shortly thereafter.

This is a ‘Guns Saving Lives’ story but, in California, it’s truly difficult to know what the future holds for private security and citizens. The laws governing the purchase of ammunition and several aesthetically-defined firearms are expected to force private security and concealed carriers to carefully account for every round and judge whether or not California considers their choice in firearms to be illegal by state law.

In a case like this, dealing with a petty thief who would draw a knife, we’re dealing with someone so dumb that him and people like him may be a legitimate threat to regular law-abiding citizens.

Let’s take the petty theft into consideration. If the value of the goods is less than $950, the charge is usually a misdemeanor.  It’s a grocery store. There is no possible way that man could be smuggling $950 worth of groceries on his person. It’s theoretically possible given the amazing lengths criminals will go to take property from others but it’s just not practical.

And judging by the fact he was willing to escalate the situation to violence, he was never going to be that ace criminal that figured out how to pull off a big heist.

The armed security guard thankfully had a handgun on him. If asked to contend with an armed thief with only a can of pepper spray, the vast majority of people would not escape that situation without injury.

No $12.50/hour job is worth permanent nerve and tissue damage.

We’re not sure if the security guard intentionally aimed low to avoid running that razor thin line of California’s imaginary definitions of self-defense or if the rounds just happened to hit there first, but he was not charged with any criminal wrongdoing.

Shoppers, probably unaccustomed to hearing gunshots from good guys, will likely complain to no end to the manager.

Carry everyday, Californians. Who knows how much longer it’ll last?