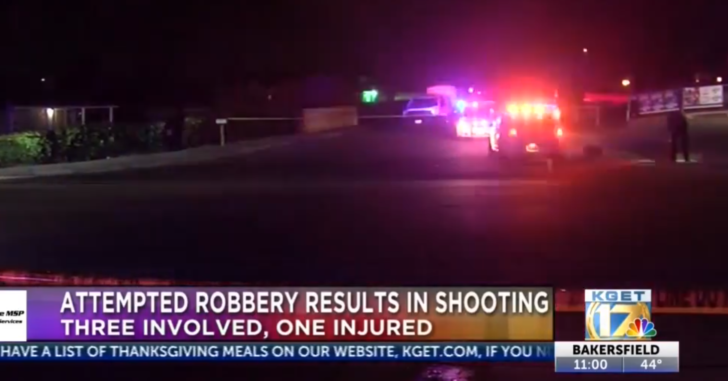 BAKERSFIELD, CALIFORNIA — The odds were 3-1, not in favor of the store clerk. Despite being outnumbered the clerk took his chances and engaged the armed robbers. After all the bullets were done flying, the clerk emerged unscathed. One of the armed robbers was not so lucky.

According to the sheriff’s office, three armed men entered the market and demanded money from a clerk. Officials said at least one store employee exhanged gunfire with the three suspects, striking and killing one of them.

The man’s body was found lying in the parking lot with a gunshot wound to his neck. He was pronounced dead at the scene.

From the report, it sounds as though the robbers didn’t know about the other employee in the store; or at least they didn’t see him. As they demanded money from one clerk, another store employee opened fire on the bad guys. A gun battle ensued between the three robbers and one store employee.

All three of the robbers eventually fled, deciding the money in the register wasn’t worth their lives. However, when the police arrived they found one of the robbers dead in the parking lot with a gunshot wound to his neck. His friends left him their to die.

Despite the odds against him, the armed clerk must have liked his chances. Good for him on defending himself and his co-worker from what could have been a deadly encounter.