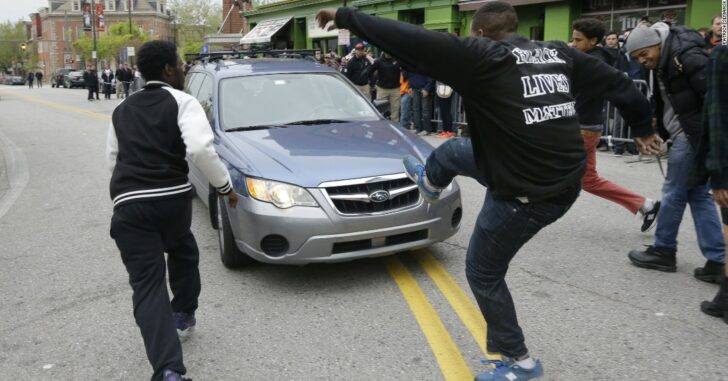 Regretfully, as we’ve observed in the news lately, the occurrence of angry protests are on the rise. With incidents like Ferguson and Baltimore in which protests end up turning violent, it puts all innocent bystanders at risk of harm or worse. Anyone can search the news lately and more than likely find several examples of so called “protests” turning into violent looting and vicious attacks on law enforcement. With these types of incidences on the rise, it’s possible any one of us could be caught in the midst of a potentially dangerous situation.

As Concealed Carry holders, we like to think we’re prepared for any type of circumstance in which we might have to defend ourselves. Encountering a potentially violent protest is one of those situations that can’t be easily negotiated and can be horribly unpredictable. There exists a wide area of variables that have to be considered; such as escalation of force, validity of the threat, and existing Duty to Retreat laws for example.

First of all, if an area in which you reside or work is being subjected to these types of protests; you may benefit from keeping a close eye on local news reports. Find out what areas are being affected by the protests and/or riots. If you live or work in those areas, you may want to consider calling into work and spend the day ensuring your home is safe and secure. If that’s not an option, then attempting to find an alternate route to and from work may be a reasonable idea. However, if there is no possible alternate route and you’re forced to get within close proximity to the protests, there are steps you may want to consider.

Preparing yourself to venture out into the unpredictable nature of one of these protests isn’t easy. No one could fully prepare themselves for what could possibly occur when trying to negotiate a protest turned violent. You can’t foresee how the crowd will react when you attempt to drive near them, or worse, through them. Ensuring you have a full tank of gas would be your first step. You never know how long you may be stranded in traffic if things get out of hand. Making sure you have your cell phone and charger available is also a must. Being able to record any possible incident would also be a plus. Most of all make sure your chosen Concealed Carry firearm is properly maintained and situated however you choose to have it when driving. Some simply keep their firearm holstered while driving. I personally have a holster rig underneath my steering wheel to keep it available for an easier grab when driving long distances. I also make sure I have a spare magazine or two available within the cab of my vehicle.

Should the unfortunate occur, and you find yourself in the midst of one of these protests turning violent and unruly; the first and foremost action should be to lock your doors and keep your windows rolled up. If you’re just sitting in traffic and surrounded by angry protesters, it’s certainly not advisable to be leaning out your driver side window and yelling at people to get out of your way. Though that might be your first impulse (I know it would be mine), you have to remember to keep a level head. You’re already in a dangerous situation. The last thing you want is to escalate it needlessly. Keep your vehicle secure. Keep your head on a swivel. Remain vigilant and maintain proper situational awareness.

If the situation escalates to the point you feel you might be in danger, I would suggest your next course of action be to call the police. Inform them of your situation, the make and model of your vehicle, and most importantly that you’re a Concealed Carry holder and you are in fact armed. It is important to keep your firearm holstered until the point you feel your life is threatened, and not a moment sooner. Say for example, you’re stuck in the crowd and several of the protesters approach your vehicle. They are shouting, acting aggressive towards you. Keep your composure. Inform the dispatcher of the change in situation. Me personally, if they are just shouting at me and making no attempt to enter or break into my vehicle, my firearm would still be holstered; but you can be sure my phone would be in my non-firing hand and the other poised and ready to make the reach for my holstered firearm.

Should these protesters escalate the situation and attempt to enter your vehicle by pulling on the door handles, or worse attempt to break your windows; at that point it’s safe to say your life could be in danger and drawing your firearm would be warranted. Again, be sure to keep the dispatcher informed of the situation. However, after the firearm is drawn, still maintain proper muzzle awareness and trigger discipline; but be sure the protesters would have a clear view of the firearm as well.

Any half-intelligent angry protester should see that the pickings weren’t so easy when seeing their intended victim is armed, and should retreat. However there are those out there that aren’t so intelligent. It’s difficult to hypothesize how the situation would carry out from that point. The most important aspect is to keep a level head. Make sure you’re communicating clearly with the dispatcher, stress the fact that your vehicle is being assaulted and you are in fear of your life; and again, that you are legally armed.

Hopefully, law enforcement would be quick to respond before the situation heightened even further. At this point I must stress that you obey police instructions clearly and quickly. You may have just experienced a stressful and angering situation. Your vehicle might have been damaged. Your temper may be flaring and you’re feeling every emotion a victim of a crime would feel, but remember that you’re an armed person in a violent crowd. The police are attempting to maintain order and safety. You might be ordered to relinquish your firearm. You might even be handcuffed and put in the back of a squad car while the police discern the situation. My advice would be to follow their instructions to the letter and let them sort out the situation. The police have a job to do. Let them do it and you’ll be on your way soon enough.

As stated before, there really is no way to fully prepare for what might occur if you find yourself in the situation of an angry protest. Many possibilities and outcomes exist, and you can’t presume to know them all. You may be able to negotiate the crowd without as much as a second thought. Or you may be completely surrounded by angry protesters and unable to proceed. Whatever the case may be, being prepared is your best defense.

Disclaimer: The above are opinions of the author. In any situation dealing with self-defense, it is your responsibility to understand the laws in your area, and what you can and cannot legally do. Simply put, use your best judgement and always abide by the law.