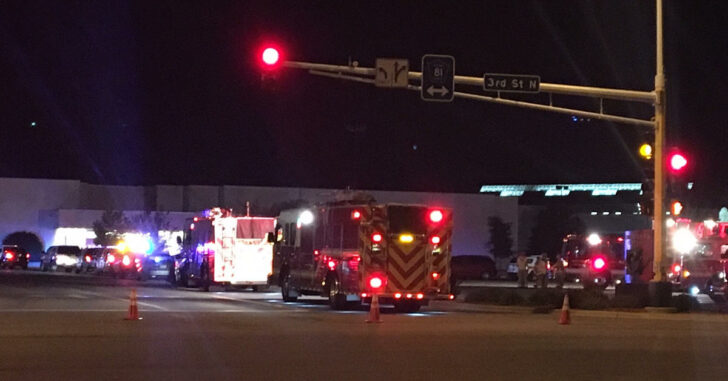 ST. CLOUD, MINNESOTA — An off-duty police officer was able to stop a violent extremist in the midst of a stabbing rampage which left eight people injured at a local mall. The incident is still under investigation but the suspect is believed to have shouted “Allahu ackbar” prior to brutally stabbing his victims. He allegedly asked one individual whether or not he was a muslim before stabbing him. The attack has not been labeled a terrorist attack because St. Cloud is still investigating it.

According to Star Tribune, the off-duty officer used his gun to neutralize the attacker in a Macy’s store. Because the attacks were spread throughout the mall, the entire mall is being treated as a crime scene according to St. Cloud police.

“All of a sudden I heard pop, pop, pop,” Harley Exsted told the St. Cloud Times. “I thought someone tipped over a shelf. All of a sudden these people started running. I just saw everybody running our way.”

It wasn’t the man screaming Alluhu ackbar or the stabbings that got the crowd running — it was the sound of gunshots. And if that off-duty officer had not been armed and ready, there likely would have been quite a few more stabbings before this attacker was neutralized.

The coloring of this incident as an act of terrorism versus just an act of violence is a moot point in the minds of any concealed carriers. It doesn’t change the perspective that we must be ready at any time to resist a violent person through any means at our disposal. Ideally, this is through judicious placement of rounds on target.

This attack occurred the same day as an attempted bombing of a Marine Corps 5K in New Jersey and an IED detonation in New York City.

None of these attacks look to have a very well thought-out organization to them. We’re seeing violent people doing violent things with little to no active resistance. Thank goodness at least one person in the St. Cloud mall had a gun and was able to respond to the stabbing attack.

Concealed carriers and off-duty police can’t do a whole lot against explosive devices, sadly, other than cordon off the area and get people the heck away from a suspected IED.

Sorry, folks. We’re in a brave new world now. The occurrences of random, violent acts is likely only going to get more frequent before it drops off. Mainstream media will likely hedge their bets carefully as they have many interests to maintain outside of reporting the news.

As a former Marine stationed in Iraq, I can tell you that in any other normal day situation, we could safely report IED detonations as being precisely what they are and expect a cool, rational response. We’re in a country of people who want to paint feelings on cold, hard violence and it’s just not going to work. It never works.

Your job, as a concealed carrier, is to do the following:

1.) Carry every single day, everywhere you are legally allowed. You cannot fight back with guns you don’t have on your person. You can’t protect your family if you don’t have the means to protect them. Your gun is your first line of protection in a situation like this.

2.) Get your family and friends to carry. The more the merrier. We need everyone out there making traditional soft targets such as malls and restaurants a lot riskier of a proposition for a mentally ill radical to take out his aggression.

3.) Never assume a violent man is acting alone. That is an assumption that can cost you your life, as we’ve discussed specifically in a previous article. You’re much too valuable to get taken out by a dirt bag waiting behind the dirt bag conducting the violence. Situational awareness, cover and concealment, and judicious fields of fire will save your behind and ensure you get to take your family home after the dust settles.

Do these things and you’re doing your part to ensure the survival of yourself, your family, and whatever lucky ducks happen to be to your left and right if something horrible happens.

Be safe. Carry every single day.

Previous article: One Mother Knows That Real Monsters Don't Hide Under The Bed -- That's Why She Has A Gun Next article: [SPONSORED] Otis Launches New Line of Gun Cleaning called Otis Smart Chemicals