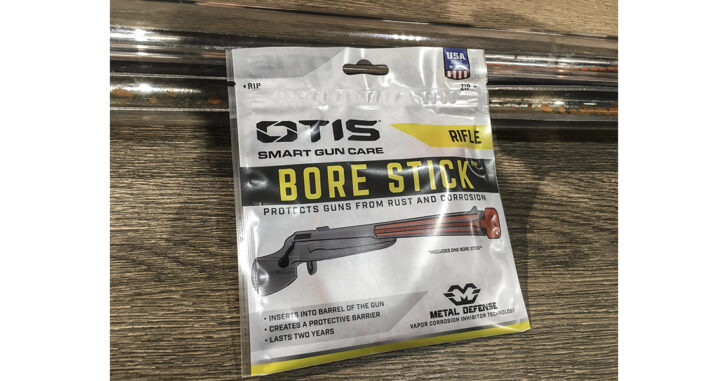 Face it, if you have a fair number of firearms, you probably don’t shoot some of them very often. There are a couple of guns in the back of my safe that haven’t been shot in, well, years. The biggest problem with that — especially if you don’t have a humidity- and climate-cotrolled safe to store those little-used guns, is that dreaded enemy of all metallic objects…corrosion.

The old school way to guard against forming those blooms of rust — particularly in the barrel — is to take down your gun down, give it a thorough cleaning and apply a thin, even coat of a good gun oil (I don’t even want to think about how much Rem Oil I’ve bought over the years).

But now you have a different, simpler way to keep those barrels shiny and rust-free. Otis’s new Bore Sticks are pistol-, rifle- and shotgun-length cords with a rubber-like plug on the end. The plastic core of the Bore Stick is impregnated with a chemical called VCI (vapor corrosion inhibitor), which outgasses through a Nomex wrapping which is soft against your lands and grooves. The VCI forms a microscopic coating that protects any metal surface it touches. The end cap seals the bore to contain the VCI and keep your bore protected for up to two years. Here’s a tip: write the date you open your Bore Stick on the orange plug so you know when it’s time to replace it.

Previous article: Thug Storms Detroit Store Brandishing Handgun, Shows What Happens When No One Is Armed Next article: California Business Owner Acquitted of Murder After Shooting Man Who Wouldn't Leave His Property