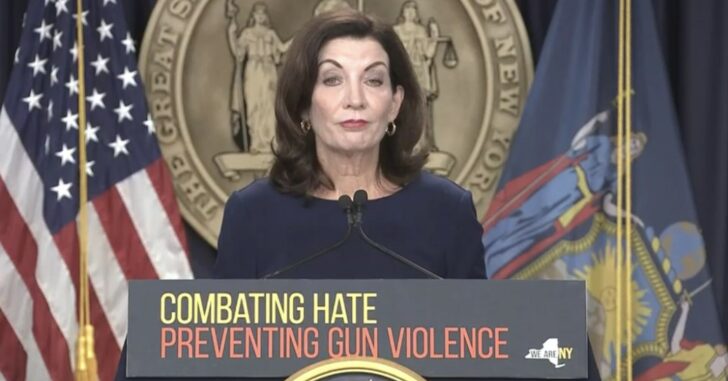 The newest push is for Microstamping, which proved to fail miserably in California, as no manufacturers have yet been able to create such a ‘feature’.

What we don’t have is a way to give each bullet a unique fingerprint. Microstamping allows police to trace bullets and casings back to gun that fired them. That’s just common sense. We’ll work with our legislature to get that done.

Along with microstamping, they’re also looking to push the closing of other so-called loopholes, which we’ll get into below this heartfelt tweet:

We must continue to push forward on new methods to combat gun violence and protect our communities.

I'm calling on the legislature to pass a package of bills that will close loopholes in our laws and provide law enforcement with more tools to fight gun violence. pic.twitter.com/YHOc1GU7J9

During the news conference, Hochul had someone hold up a rifle that was… truly terrifying.

It’s concealable, they’re high powered, and they can be modified to take a high capacity magazine. We will revise definition of a firearm to ban them in New York. It’s a loophole so big you can drive a truck through.

The thing with gun laws is this; the only people who will end up paying the price are the law-abiding gun owners of New York State. The suspect in the Buffalo shooting knew exactly what to do to modify his legally purchased firearm, and if he didn’t, I guarantee you he would have made a purchase outside of the state.

These are criminals. Let’s not forget that important fact.

If you have any desire to watch the entire news conference, you can find it below.