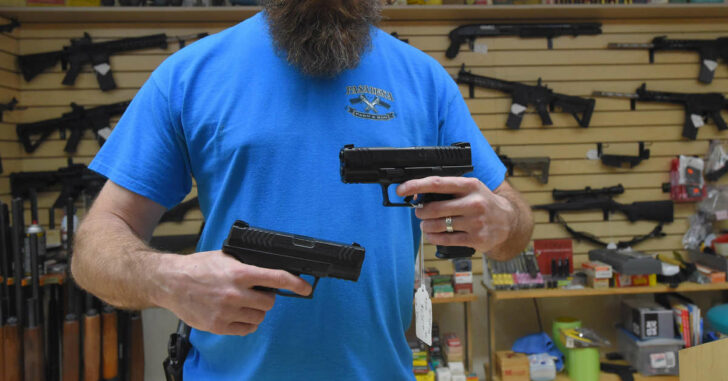 via the Baltimore Sun

“The sentiment behind it is pretty clear,”Police Commissioner Kevin Davis said. “This gives the police another tool to make sure we protect kids.”

How this will actually save kids is completely unknown. For instance, if a teenager points a replica pistol at police, the police officer will still interpret that gun as a real one and defend his life… Because people want to go home after their shift is over. Criminals don’t discriminate with age. You can have a 16-year-old defending your turf, roaming the streets with a loaded handgun or a replica or a BB gun. It’s all the same illegal, criminal enterprise.

The only person that’s going to know is him and whatever police investigator is inspecting the crime scene.

Previous state efforts to ban the manufacture and sale of replica firearms have failed multiple times at General Assembly. The hold-up? Not every part of Maryland is like Baltimore. There are plenty of places that aren’t experiencing a great number of issues with teenagers committing violent crimes or impersonating the use of actual handguns to commit violent crimes. That’s a Baltimore problem.

In the vast majority of the country, people can be depended upon to be mostly law-abiding and their children mostly non-criminally violent.

Somehow, though, we keep running into the same types of incidents in Chicago, Cleveland, Baltimore, and Washington: dumb kids waving fake or real guns around and getting shot because they’re seen as threats.

As we can’t outlaw stupid, we’re left with outlawing every single article or device that they could potentially get their hands on. Ostensibly this is to “protect the kids”.

The kids don’t need protecting. They need to be educated on reality. It doesn’t matter what TV show they watch or how much their parents don’t pay attention to them, if they threaten the life of another human being, that person is not obligated to make the distinction between a BB gun or real gun.

Age is no longer a factor the second a physical life is unlawfully threatened.

Concealed carriers and gun owners have largely figured this out. Unfortunately, it seems like until Baltimore, Cleveland, Chicago, and other major crime-riddled cities do, they’re just going to ban everything that can even remotely resemble a weapon — likely penalizing plenty of people who had no intent of misusing those devices in the first place.

Previous article: Homeowner Shoots And Kills Intruder -- Neighbors Baffled How It Could Happen... Next article: If Proposed Gun Ballot Measures Go Through In California, This Could Be Your Typical Morning