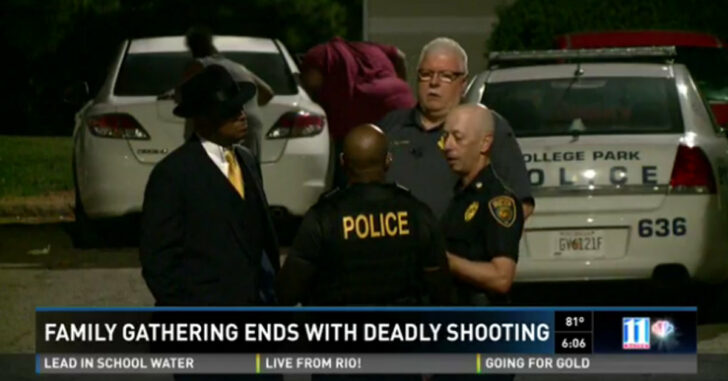 COLLEGE PARK, GEORGIA — As a family gathered to remember the loss of a departed family member, a next door neighbor brutally shot two of them. This happened allegedly during a verbal altercation that escalated into a physical one. One of the men at the gathering was shot in the head and another in the arm. Thankfully, a family member was armed and returned fire on the shooter, killing him.

Robert Wright, 59, is the alleged instigator who initially used illegal deadly force on members at the memorial gathering. According to 11 ALIVE Atlanta, he was the only person to be killed in the gunfight.

The two injured family members were successfully taken to a hospital where they are receiving medical care.

The shooting occurred late at night and was allegedly the product of an escalated altercation between that neighbor and family members. In either case, other tenants in the apartment block were obviously shook up at this sudden, violent exchange of gunfire. This is a reminder that it’s not just us and bad guys in situations like this. There are other people and their lives are just as important to preserve.

Authorities are investigating this case. While criminal charges for the man who returned fire will likely not be pursued at this time, there is definitely some indication that criminal charges were not initially ruled out.

Self defense is self defense. There’s no two ways about it. If someone is trying to use deadly force to hurt you, your family, or your property, you have every right in the world to defend yourself by any means possible.

De-escalation should always be the first method of dissuading a fight before it gets to that point. Not everyone will go with it, though. Whether Wright was in an altered state of mind or just chose to go to the farthest extreme in an encounter is something we’ll likely never know.

This is also a reminder to not be the hot-head. People will make mistakes, words will get exchanged and tempers can flare. It’s a concealed carrier’s job to remain cool and always be on top of the situation.

It’s a tragic end to a family memorial celebration but hopefully a learning lesson for us.

Previous article: #DIGTHERIG - Jobe and his Glock 19 in a K Rounds Holster Next article: Airsoft Or Paintball For Training -- Any Benefit For Daily Carry?