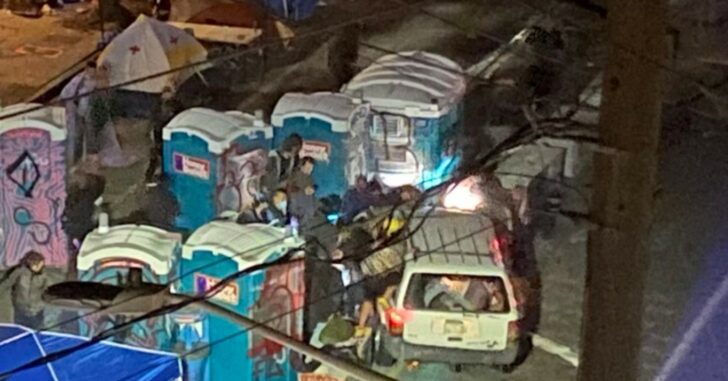 We’ve lost count of the number of shootings that have taken place inside Seattle’s cop-free Summer of Love block party, AKA the Capitol Hill Occupied Protest zone or CHOP. CHOPanistas seem to have a propensity of gunplay and shooting and killing each other.

Last weekend’s activity — three shot, one dead — along with some legal action was enough to prompt Seattle’s Mayor Jenny Durkan to announce that she was going to negotiate with the CHOPanistas in an effort to shut down the oozing sore in the middle of the Emerald City. But it’s still there and no one really expects it to be dismantled any time soon if left up to Mayor Jenny, who’s been a big supporter of the area.

As the AP notes,

Durkan has expressed support for the protest, calling it “a peaceful expression of our community’s collective grief and their desire to build a better world.”

Early this morning, more gunfire broke out with deadly results.

Woke up to what sounded like gunfire and this scene just after 3 am this morning. #CHOP @KING5Seattle pic.twitter.com/YGjY8AOtII

One man is dead and another in critical condition after a shooting early Monday morning in the Capitol Hill Organized Protest Zone.

This at least the fourth shooting in or near CHOP since Saturday, June 20.

It isn’t clear how many more people will have to be shot and killed before the Mayor will order that the CHOP and be taken down, allowing the city’s police to retake their abandoned precinct building. Or how many more lawsuits locals will have to file to push her to act.

What’s the over/under on the number of months before CHOP is actually torn down and order is restored?

Previous article: Kryptek: Behind the Brand. Watch This Camo In Action! Next article: [VIDEO] Armed Couple Releases Statement Via Lawyer Explaining Why They Did What They Did