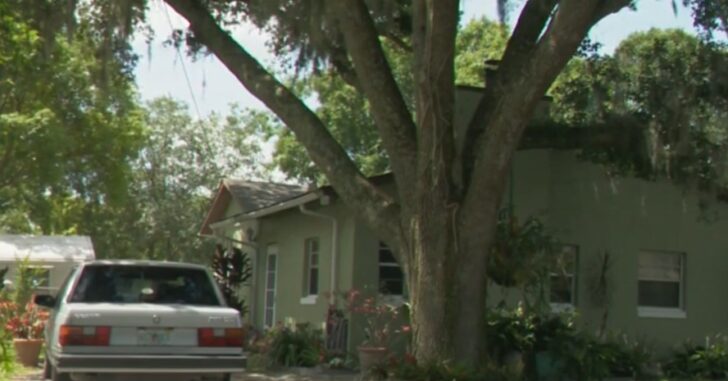 AZALEA PARK, FLORIDA –  A man in his thirties was fatally shot by a 69-year-old homeowner after he repeatedly ignored her demands to leave her property. Orange County deputies responded to a reported break-in at her home around 12:40 Sunday afternoon.

Virginia Morrison described the incident in detail, saying, “I heard the door handle kind of rattle. And then the door opened, and the guy stepped in my house. I didn’t know who he was. I looked at him and I said, ‘who are you and what do you want?’ Nothing. The whole time the guy was here. He never said one word and I never saw his eyes move. Total blank,” she said.

Morrison picked up a broom and hit the intruder twice in the face, which did nothing to deter him. She ran to her bedroom and alerted her partner, Charlie, that an intruder was in their home. According to her, Charlie has a .45 pistol laying on the bed. “I looked at him, I said, ‘Get your gun! Get your gun. That gun never fazed this guy. Just a total blank.”

Charlie called 911 and then fired a warning shot from his pistol into the ground near the intruder, who didn’t react. But Virginia reacted – “I said, ‘I’m getting my damn gun’ so I went to my bedroom and got my gun. I went out the back door and I came to the fence, and he sees me. He starts toward me. I fired a shot above him. ‘Back off, dude, I’ll shoot you.’ He just keeps coming toward me. So I shot him.” Responding deputies arrived after the shooting occurred and found the man with a single gunshot wound. He was transported to a local hospital where he was pronounced dead.

“I feel bad for his family. But you just can’t walk in people’s homes,” Morrison said. She and Charlie, who is nearly 80, have lived together at the location for almost two decades. “I had to do what I had to do to protect myself and Charlie. And I would do it again. If I had to, but I don’t want to do that,” she said. “I hope God can forgive me for taking a man’s life.”

Monday afternoon, the intruder was identified as 38-year-old Ezequiel Rosario-Torres by the Sheriff’s Office, who also commented that the case will be forwarded to the State Attorney’s Office for review and a determination if any charges will be filed.

Previous article: No, This Doesn't Mean 'Free Gun' In Your Rental Car Next article: Springfield Armory Introduces The 1911 EMISSARY 4.25″ 9MM