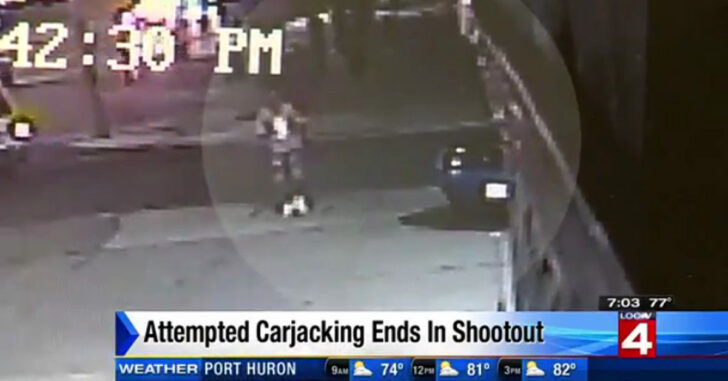 DETROIT, MICHIGAN — Staring down the barrel of an armed robber’s gun, one concealed carrier had moments to react to save his own life. Surveillance footage outside a local liquor store captured a harrowing scene.

According to Click On Detroit News, an armed robber waited patiently for one man to exit a local liquor store before springing into action. The robber put the barrel of his gun in the concealed carrier’s face. The concealed carrier, thankfully armed, grabbed the man’s gun and pushed it to the side and pulled his own gun out. According to police, he fired four to five shots before breaking contact with the robber and making his way to safety.

“He pulled out his own weapon and started shooting at the attempted carjacker,” said Sergeant Robert Wellman, of the Detroit Police Department to Click On Detroit News.

No word on how the armed robber faired but the concealed carrier appears to be in good health. That’s why it’s important to always carry — even when we’re making routine runs to the grocery store, liquor store, or even to a Redbox movie rental.

The realities of close quarters gun combat are usually pretty grim. Faced with little room to maneuver and almost certain grave injury, there’s little time to put thought into motion. It’s a miracle that this concealed carrier managed to get away in one piece. As for the robber, if he’s still breathing, he’s probably strongly considering a change in career.

Detroit police are offering a bounty on any information related to the alleged robber but if there’s one thing we’ve figured out is that when seconds count, having a handgun of your own can certainly level the playing field just a bit.

Be careful out there, concealed carriers. It’s a rough world and it’s only getting rougher by the day. Situational awareness and carrying your handgun with you everywhere are just some of the ways we can turn the tide on bad guys looking to stake out an easy claim.