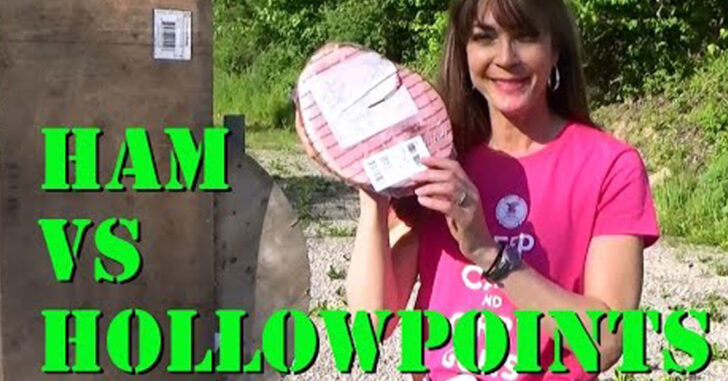 In recent months, we’ve seen many law-enforcement departments including the FBI move from .40 S&W to the 9mm because of its ability to take down a bad-guy but also because it allows for higher capacity. As a shooting instructor and one who loves to be at the range, I’ve always found myself more prone to using the most popular three calibers of ammo in a semi-auto pistol, that is the 9, .40 and .45. Rarely did I ever do much on the range with revolvers, mostly because the small .38 snub is not a terribly pleasant round to shoot out of a small framed revolver, and a .357 in a small gun would be impractical for most of my students who are beginners. Plus, it’s a dated platform, right?

A few weeks ago, a shiny new Ruger GP100 with a four inch barrel arrived at my FFL, and I bought it. And, of course, we had to do a video with it. The original premise was to test hollow point rounds versus ball ammo in a full sized ham to show what each did in something that roughly resembled human tissue. Hollow points didn’t disappoint in terms of delivering what they are supposed to deliver, which is heavy disruption of tissues and little collateral damage.

Then, we brought out the revolver and fired both .38 special standard loads and a .357 magnum round. Neither was hollow point. The .38 did what you might expect from a round of ball ammo. It passed right through the slab of meat, leaving a hole, but nothing terribly dramatic. Then came the .357. Yowza! When the flat nose of the round hit that piece of ham, there was meat in all directions! There was definitely expansion in the round and it was backed by impressive force. It actually made the .45 look like a .22 by comparison. Don’t get me wrong, the .45 is still a favorite round of mine, but I was reminded by this little test just how powerful and relevant the .357 magnum still is.

I’m not sure I’d recommend a .357 to my female shooters as a carry gun, but as a home-defense gun? As long as you practice often, it’s absolutely a devastating round, and that makes it very relevant in today’s modern world of ammunition.