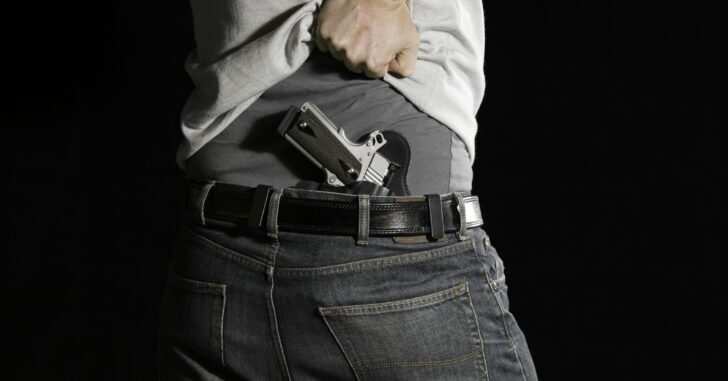 The biggest mistake a concealed carrier can make: dying at the hands of an aggressor. Only not really. Let’s be honest. You could do everything right in an attack and still be killed. By the same token, you could do everything wrong and live. Concealed carry is a game of playing the odds. The better prepared you are, the greater your chances of emerging victorious. Just how much thought and training you put into carrying is up to you. But here are three common mistakes that can get you killed . . .

1. Not carrying your gun

The first rule of winning a gunfight: have a gun. I know plenty of people who have a concealed carry permit (a Constitutional infringement but don’t get me started) who only carry occasionally. They tool-up when they’re going downtown. Or when they’re carrying large amounts of money. Or when they’re with their family.

One simple thing to keep in mind: it’s not up to you when a bad guy attacks. It’s up to them. And they don’t make appointments. While bump-in-the-night scenarios get a lot of attention — and generate lots of shotgun sales — many assaults happen in broad daylight in “safe places” like . . . Walgreen’s.

If that seems like too much of a PITA, chances are you’re carrying the wrong gun. Or wearing the wrong holster. The easiest solution to concealed carry reticence (at least for men): pocket carry a small, thin, light firearm. They’re not ideal for self-defense but they satisfy the aforementioned first rule of gunfighting.

2. Not practicing drawing your weapon

The People of the Gun tend to focus on the gun. Why not? Guns are fascinating. Cool. Sexy. But when it comes to armed self-defense, your ability to quickly and efficiently present your gun to the bad guy or guys is more important than the type of firearm you carry.

Plenty of gun gurus who will tell you that the shooter who hits first is the most likely to win. Which makes the speed of presentation more important than the speed of firing. Think of it this way: the faster you get the gun out, the more time you have to aim and shoot. The more accurate you’ll be.

First, make sure you have a holster that enables a quick draw. Yes, I just recommended pocket carry. Yes, that’s not the best holstering system. Truth be told, concealed carry is a compromise. But no matter which holster type and gun you carry, practice drawing.

ALWAYS unload your gun, safety check it and put the ammo outside the room when you practice. I practice twice a day, at least ten draws. If you can’t be bothered, do it less. But do it. Often and for the rest of your life.

3. Talking too much to the cops after a defensive gun use

If you’re involved in a defensive gun use, the police will pump you for information. How many shots did you fire? Where were you standing? How did you know he was trying to attack you? Did you give a verbal warning?

As you know, you have the right to remain silent. Anything you say can and will be used against you in a court of law. Use that right. Remain silent. That said, there is some information you should provide to second responders . . .

Again, there’s a whole lot you can do to prepare for an armed confrontation, from adjusting your situational awareness to learning how to shoot and move. But avoid these three common mistakes and you’ll dramatically increase your odds of survival; before, during and after a defensive gun use.

Previous article: Tennessee Campus Carry Becomes Law, But Not For Everyone Next article: Armed Motorist Saves His Own Life By Returning Fire On Gang