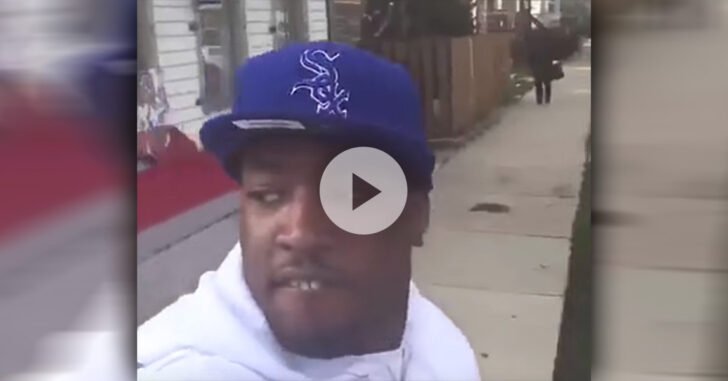 CHICAGO, ILLINOIS — This man seen in the above video was taking a selfie video of himself in front of a convenience store in the South Side of Chicago just moments before he sustained multiple gunshot wounds. It’s a graphic and frightening segment and a stark reminder of the dark times Chicago is presently going through — as if we needed any reminders.

Police officers confirmed for Buzzfeed that the man was in critical condition following the attack. The bad guy who gunned him down in front of that convenience store plowed through him and escaped in a getaway vehicle. Times are rough — and in South Side they’re downright medieval.

These types of rampant assassinations have become the cultural norm in this area. As someone who doesn’t live in Chicago, sometimes I ask myself just how long before they spread?

Let’s just get one thing clear — it’s not gun control that curbs this type of appetite for violence. This man’s shooter doesn’t worry about his concealed carry permit or even the FOID card required for the purchase of a handgun. He’s not going to worry about either of those things before going out and doing his business. Chances are good, if he ever sat down for an interview, he wouldn’t be altogether phased that the rest of the country is held to high standards of concealed carry training and a permitting process, either.

Life in the United States doesn’t normally resemble the South Side of Chicago — thankfully. The people who live there, live under some very harsh, inconsiderate conditions that more resemble a controlled descent into third world Brazilian favelas than they do anything we would consider the living standard in the USA. That said, being responsibly armed and ready to defend our lives requires a dedication to situational awareness and being willing to take that responsibility every single day by carrying every day.

Victims don’t get to choose. That’s why they’re victims. Being a concealed carrier is a choice. And more importantly, it’s a choice to get a chance.

Previous article: HEAD-TO-HEAD: Springfield XDs -vs- GLOCK 43 Next article: Armed Robber's Plan Goes Wrong When Employee Snatches Gun From Bad Guy; Why It's Best To Have Your Own Gun