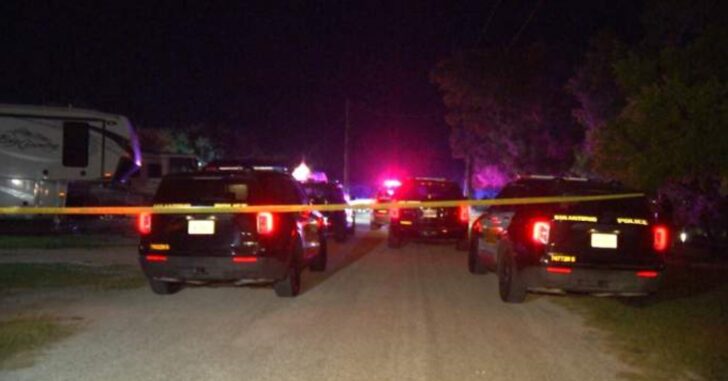 SAN ANTONIO, TEXAS – Two men were injured early Friday morning during an altercation that occurred inside an RV park. SAPD officers were dispatched to the Brauning Lake RV Resort in the 13500 block of Donop Road, just after 2 a.m. after a 911 caller report of shots fired.

Officers arrived to discover that there were five men involved in an altercation, and two of the men were taken to Brooke Army Medical Center by EMS for treatment. According to officers, a 26-year-old man was inside a recreational vehicle when four men rolled up in a pickup truck causing a noise disturbance.  The man stepped out of his trailer and told the men to keep the noise down.

Instead of quieting down, three of the four men in the truck approached the man. One of them punched him in the face, knocking him to the ground. He got up, went inside, and retrieved a firearm which he used to shoot his 55-year-old attacker, grazing his ear, and wounding him in the leg.

The other men responded by attacking the armed man, beating him, and taking the gun away from him. It was then used to shoot him in the head and backside. He is listed in critical condition, while the condition of the 55-year-old was not given. The other three men were detained for questioning, and the investigation is continuing.

Maintaining distance from people in these circumstances is important, and getting yourself into a position where you can have your gun taken from you is extremely dangerous.

Pick your battles, be cautious, and make good decisions that help your chances of zero confrontation.

Previous article: Female Employee Killed During Armed Robbery Attempt At Cannabis Shop After Armed Employee Gets Into Gunfight With Suspect Next article: Armed Appendix Carrier Waited Until The Perfect Moment To Draw And Fire