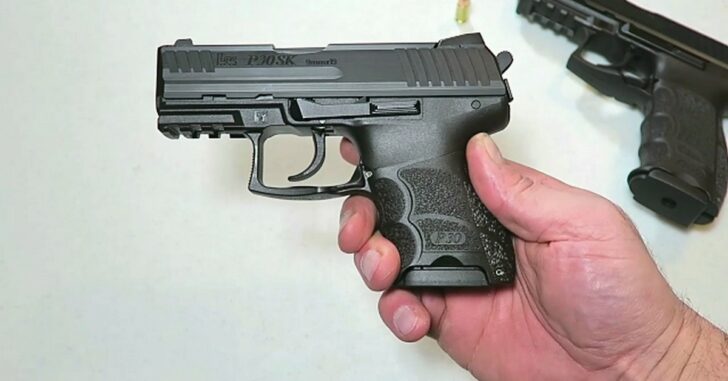 HK handguns have always been known to be first class. They have enjoyed a fine reputation for being quality made with excellent engineering. For those who have experienced HK firearms are well aware of their reliability, smooth shooting and very nice looking products. They also offer a variety of trigger pull variants which will suit the liking of most any shooter. I currently own two HK handguns which are the P2000 in 9mm and the P30 in .40 s&w. They have both performed well for me and the ergonomics of these handguns are second to none.

In the spring of 2015, HK introduced a the P30SK (SubKompact) to meet the need of the loyal P30 fans who wanted a smaller model for concealed carry. The HK P30SK is a shorter and lighter handgun with many of the same features of the full size model. As is the case anytime HK introduces a new model, the gun world embraced it and people were excited to get their hands on it. I, of course, was no different and was extremely excited to check out the smaller HK P30SK.

The grip on the P30SK offers a wide variety of modifications to fit each shooter’s hand size. The choice of three different sizes of backstraps and six various sizes of grip panels is the most flexibility I’ve ever seen with grip modification ability for a CCW gun. The texturing is similar to that of a VP9 and the finger grooves allow for a firm two finger grip. The double stack 10 round magazine has a flat baseplate that fits flush into the grip which makes the overall height of 4.57” the shortest possible. It is shipped with two quality magazines with sight holes to visually see the loaded rounds. The magazine release is located under the trigger guard (paddle) which is common with HK handguns. I already mentioned that HK offers many various trigger pull variants. The P30SK featured in this review is a DA/SA model known as a “Variant 3.” The long double action pull is 12 lbs and the shorter single action pull is 4 lbs which is standard in this format. The trigger itself is well rounded as the single action firing is quick with some of the fastest follow up shots I have experienced. Those who love hammer fired handguns will fall in love with this trigger action. The polymer frame is very similar to it’s big brother in a smaller package. It has a 1913 rail included for accessories which is a nice feature with a CCW gun. The slide has both rear and front serrations with a decocker on the rear of the slide. I like the positioning of the decocker due to the ease of use which eliminates other levers near the slide stop as seen on many Sig Sauer models. Simply running a thumb over the decocker and pressing the serrated button will safely decock the gun without issue. The slide stop itself is ambidextrous along with the mag release, making this gun “lefty” friendly. The sights are a three dot format with a yellow tint. The yellow tint is luminescent which work like a glow in the dark feature. They need to be charged by light for the fullest effect which is equivalent to night sight brightness. The brightness will not hold over time but I do like the luminescent sights. They stand out in low light situations making your target easier to acquire. Many will view the HK P30SK as a larger sized subcompact handgun. The slide width is 1.37” thick which is wider than the average subcompact 9mm. A fully loaded P30SK weighs in at 29.5 ozs making it a bit heavier however it is very well balanced. Many CCW people have become spoiled with the lightweight single stack 9mm handguns however the reliability and quality of this HK P30SK makes up for any disadvantage it may have. Field stripping the P30SK is easy and will not require any tools. Once assuring the gun is unloaded and the magazine is removed the process is simple. The slide has a cutout under the front serrations that needs to line up with the slide stop lever. By moving the slide back, to meet the slide cutout with slide stop lever, just push the slide stop pin button on the opposite side. The slide stop pin will then release the slide off of the frame. The trigger will need to be pulled to complete this process. It is important to note that the slide stop pin will not be removed from the frame like the HK P2000 models require. HK uses the end of the guide rod to attach to the bottom of the barrel for tight internal movement. This is a cool little feature that sets HK apart from other handguns I have experienced.

Overall, I have to say the HK P30SK is an outstanding handgun. I find that the ergonomics, mag capacity, trigger function and reliability is second to none. Many will wonder if this gun is worth the hefty $600 ­ $650 price.

Although there are other choices out there, I would argue the P30SK is worth every dollar due to the reliability and shooting accuracy it offers. I have a fair amount of experience with HK handguns and I have to say this P30SK has met the highest expectations in my eyes. Previous article: NOT SATIRE: Bomb Squad Called, Neighbors Evacuated After 75 Rounds Of Old .40 S&W Rounds Found Underneath Home Next article: Senator Who Voted Against Speeding Up Concealed Carry Application Process Is Arrested For Firing Rifle At Wife's Car -- While Nude