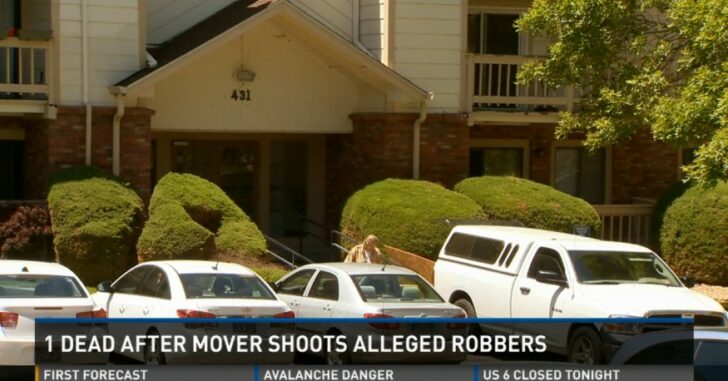 AURORA, COLORADO — Three juveniles tried to hold up three movers as they were bringing items into an apartment late Friday night.

According to reports, the three armed suspects, ages 16-20, approached the three men in the foyer and then attempted to rob them at gunpoint.

“Two of the movers started to hand over their money,” said Nick Metz, Aurora Police Chief. “The third mover who was fearing for his safety and the safety of his friends, pulled his weapon out.”

That third mover, armed and refusing to be a victim, ended up shooting each of the three suspects. Two suspects were taken to the hospital, where the one died on the way. The third suspect fled the scene, but was later found to have brought himself to the hospital for medical attention.

No charges have been filed. According to the District Attorney’s office, it appears to be a case of self-defense. The investigation, however, is ongoing.

The three movers have been cooperating in the investigation, police said.

“Whether this person had a concealed permit or not, if you have a weapon and you are placed in fear of serious bodily injury or death, you are entitled to defend yourself,” said George Brauchler, District Attorney Eighteenth Judicial District.

Chief of Police Nicholas Metz briefs on the media on a shooting that occurred in the 400 Block of South Kalispell Way. We apologize in advance for the quality of the video. The footage taken from a live stream.