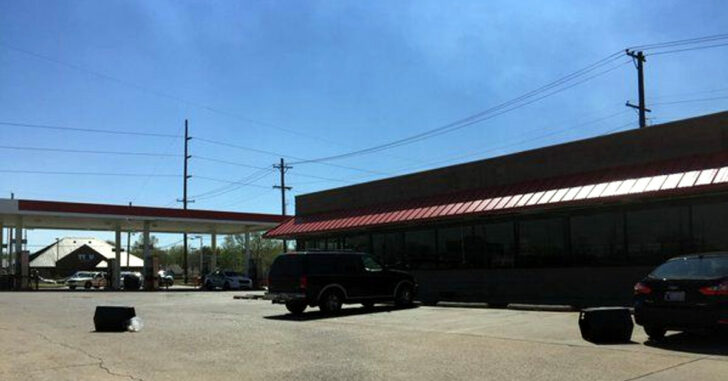 TULSA, OKLAHOMA — As a local gas station owner was getting ready to close up for the night, he saw a man return who he had gotten into a verbal altercation with before in the day and had asked to leave. This time, the man was back and it was 2 o’clock in the morning. According to video surveillance and the owner’s own testimony, the man proceeded to start yelling and throwing trash outside the store. But this wasn’t the first time the man had shown up trying to cause trouble, as one Tulsa news source would report.

Witnesses corroborated that the same man had entered the store nearly twelve hours earlier with a piece of chain or heavy rope with a weight tied to one end, swinging it around wildly, according to Sgt. Kurt Dodd’s statement to Tulsa World.

The man had left and now he was back, only this time it was 2 a.m. and there wasn’t anyone else around. That’s when the owner took measures to protect himself and shot him.

That sort of nonsense and endangerment of customers, property, and one’s own life just doesn’t fly very high in Tulsa. The assailant was recovered by emergency medical personnel and evacuated to a nearby hospital in reportedly stable condition.

Officers declined to report the details about what the argument had been about.

“Whatever it was about, I don’t think it was worth coming back at 2 o’clock the next day to continue the argument,” Dodd said.

This is a dilemma any home owner, business owner, and gun owner may be forced to deal with… How to keep the peace when someone who isn’t afraid to bring violence and destruction is intent upon doing so.

Police confirm that while the man brought an odd make-shift flail, it was still a weapon that could inflict considerable damage if brought to bear down on other customers or the owner himself. The store owner was not arrested and police seem pretty certain he acted in complete justification of self defense.

Staying prepared and giving every possible opportunity to avoid the use of deadly force are important core concepts for any concealed carrier. We reported on a similar story where a firearms instructor was assaulted by a man at a gas station and gave that man every possible opportunity to retreat before defending himself with deadly force. It’s a good reminder that when one is called to use a legal firearm to protect himself, he should give every opportunity to avoid the fight outright rather than rush in.

Maybe this recent assailant will get that picture a bit clearer while he mends in the local hospital.

Previous article: WATCH: "Why Won't My Laser Work?" This Gun Owner Makes A Big Mistake At The Range Next article: You're A Passenger In A Vehicle, Carrying A Firearm, And Are Stopped By Police. What Should You Do?