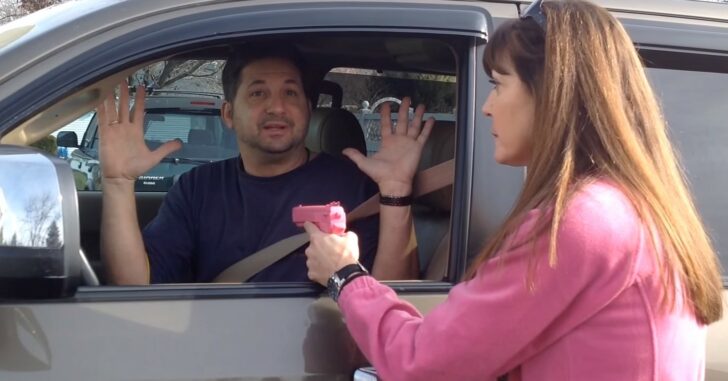 So many times, I get a chance to read some very heroic stories of fellow concealed carriers who were faced with having to use their firearm either to save themselves or an innocent person from an attack. Reading these stories always makes me ask myself, “what if?”

I have a friend who is a former FBI agent, SWAT leader and retired Captain from the Marine Corps. He’s also a firearms instructor. He actually gave that question a name, as he, too, is very in tune with situational awareness. He calls it “The What If Game.”

This game is more of an inner dialogue than it is a competition. It’s another mental training exercise to keep you sharp and aware of your surroundings. It’s also a method of getting you to ask yourself a series of questions in certain everyday situations. For example, if you’re in rush hour traffic, and you had to suddenly exit the gridlock, how do you have to position your vehicle within the confines of traffic to ensure that you could make an exit if you had to? Would you be right up on the next guy’s bumper, or would you hang back a few extra feet to allow yourself room to maneuver. As a kid, I did this when I was playing softball…”if it’s hit to me, what am I going to do with it?”

Ladies, how many of you have been driving to work, putting on some lip balm, or lipstick or talking on your phone paying very little attention to what’s happening outside your car? I know that it’s easy to lose focus of our surroundings. It happens. We’re human. But try to start asking yourself “what if” in situations where you’re at stoplights. “What if” I saw a suspicious person approaching my door? Are my doors locked? Am I in a position that I can even make a decision to avoid contact if approached? How could I get away? Carjackings happen frequently, so play the scenario in your head. Ask yourself if you’re prepared to react to the situation or act before it becomes a situation.

Our friend taught us an axiom used by law enforcement nationwide: Action beats reaction. In other words, even if you know an attack is imminent, your reaction will come after the attacker’s action. Make sense? If you’re at a stoplight and a carjacker sticks his gun in the window and tells you to get out. Even if you have your firearm in your hand, whoever makes the first move has the upper hand because the other person is in the position of having to react.

So, how do we prepare for these different contingencies as concealed carriers? It’s easy to say you’ll pull out your gun and shoot, but if you’re in a position where someone catches you off guard and has a gun in your face, the chances of you successfully presenting your firearm have diminished greatly.

Finding training courses is paramount. Through training you can learn ways to significantly decrease your chances of becoming a victim, and more advanced training can also show you some ways that could save your life if you find yourself in a life-threatening encounter.  James Yeager of Tactical Response in Tennessee always says, “your responsibility to be ready for the fight never ends.” Well, he’s right. But also preparing to avoid the fight is an even better alternative. Training and planning are both part of being ready for different contingencies so you can take action to avoid reaction. The first step is asking “what if?”

Remember, the best gunfight to win, is the one you didn’t get in. Always be aware of your surroundings.

Previous article: [VIDEO] Talon Grips at SHOT Show: One Of The Best Sub-$20 Upgrades To Your Concealed Carry Pistol Next article: Don't Shoot Your Own Car! Carjacking Victim Gets Charged For Shooting At His Fleeing Vehicle