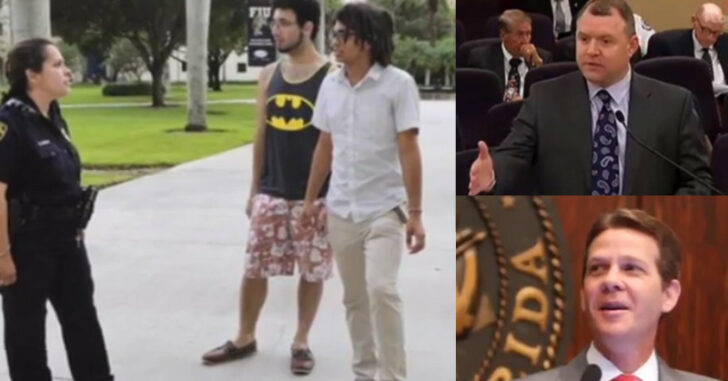 TALLAHASSEE, FLORIDA — Just want you’ve always wanted, Florida: legislators that propose advancing gun rights but for unknown reasons just drop it at the last second.  That’s seemingly what Rep. Greg Steube, R-Sarasota, did in late 2015 when he proposed legislation that would allow concealed carriers on university campuses only to drop it at the last minute.  This time, he’s returned and he’s proposing legislation which would allow concealed carriers on elementary and secondary schools.

“Every one of these college campuses that has had a shooting has been a gun-free zone,” Steube said in November, discussing his campus-carry bill.

According to this recent proposed legislation, the superintendents of school districts could permit “school safety designees” to come onto campus with their concealed carry firearms.  In order to become one of those “school safety designees”, you would have to submit to a level two background check and meet training criteria.  Those standards are set by the Florida Department of Law Enforcement.

A level two background check, for those curious, can include fingerprinting and both state-wide and federal-level criminal background checks.  These are things that are covered during the Florida concealed carry application process but it will be necessary to do them all over again… In case Florida’s Department of Law Enforcement messed up the first time?

Okay.  Screeeeeech.  Let’s stop the train a minute.  First off, campus concealed carry is only a hotly contested debate amongst politicians.  Florida residents have responded on separate occasions to polls and have placed more priority on legalizing marijuana than they have in allowing students to carry concealed on campus.

However, bearing arms is an inherent part of the Bill of Rights.

We’re splitting hairs, here, folks.  Carrying a concealed handgun on campus with the proper permitting shouldn’t even be a “hot button” topic because nobody will ever see it unless it’s needed to respond to a legitimate emergency.  Yet, we keep running into the same glass ceilings whenever Floridian legislators get to bat in either the House or Senate.

And now, we’re trying to push ahead legislation to allow on secondary and elementary schools under a euphemistic “school safety designee” title?

Just allow concealed carry by concealed carriers and be done with it.  Seems simple, right?  Apparently not.  Politicians keep pushing forward and back in this sort of drunken dance to define when and where a handgun is or isn’t allowed.  This would be comical if it weren’t reality.

In the meantime, “gun free zones” still aren’t working and never have.  Unless Florida is going to push in thousands of armed security guards into their school systems, they’re going to need to figure out a logical approach to this problem.  And, unfortunately, politicians are no good at using Occam’s Razor.

“When you have two competing theories that make exactly the same predictions, the simpler one is the better.”

Guns on campus and guns on law-abiding citizens in schools.  The manner in which you go about it should be the simplest solution possible.

Previous article: #DIGTHERIG - Trevor and his Glock 27 Next article: Bill To Allow AZ College Students To Carry On Campus In The Works