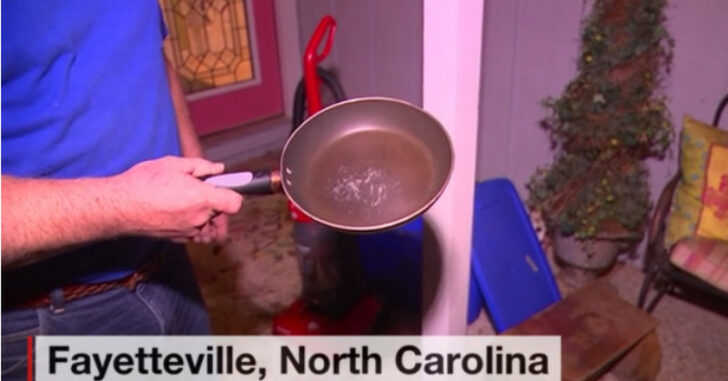 FAYETTEVILLE, NORTH CAROLINA — A 21-year-old assailant broke into the home of a Fayetteville couple after just completing a fresh assault on a mother and an elderly man who came to her aid.  It was a busy night for this assailant as he allegedly fled the first crime and ran right into the next — wasting no time intruding into the couple’s home and proceeding to directly assault the man of the house.

“I hollered at him, and he proceeded to come charging at me, trying to knock me out. We kind of locked horns and fought on the floor.  I think my wife hit him with a metal trash can a couple of times,” the homeowner said. “And once I got the frying pan, I proceeded to give him a good dose of that.”

As mentioned before, this wasn’t Sheldon Dix’s first exploit of the night.  His first encounter ended when a concealed carry permit holder opened fire in a darkened church parking lot.  He managed to escape uninjured but somehow didn’t get the message from the first near-death experience to stop him from entering in through the glass patio door of the couple’s den.

The first encounter of the evening was when he assaulted a mother waiting in a church parking lot.  He set upon her, attacking her, until a man ran out to help the woman.  Dix then turned his attention on the elderly gentleman and started beating him up.  The mother was the concealed carry permit holder and she managed to discharge two rounds to get Dix off the man.  Dix fled the scene.

Dix was captured after the altercation with the couple in their home and has been charged in connection to both crimes of that evening.  And while entering into hand-to-hand combat with a violent young man is probably the last thing any homeowner wants to deal with — the issues revolving around that seemed to have been handled sufficiently by the frying pan.  The only casualty of the evening outside of minor injuries sustained to Dix was the frying pan itself.

“The bottom is a little messed up, but I expect I can hammer it back down,” the homeowner said.

While the fight may have ended sooner if the homeowner had used a firearm, ultimately once two people are locked in ground fighting, it’s best to save the gun unless you have absolutely no choice.  The mother, from the first conflict, had the opportunity to neutralize Dix but she instead opted to simply get him off the old man.  Either through a lack of confidence in her marksmanship or no ability to place a judiciously aimed shot, she opted instead to end the conflict.

Dix is a moron and I’m sure he’ll make a great addition to the North Carolina penal system.  To the man at the church who came to that mother’s aid: you’re a testament to bravery and courage in the face of some pretty bad odds — features inculcated in the very fabric of most of the fine folks that live in North Carolina.  And to the wife who passed her husband a frying pan — that’s teamwork.