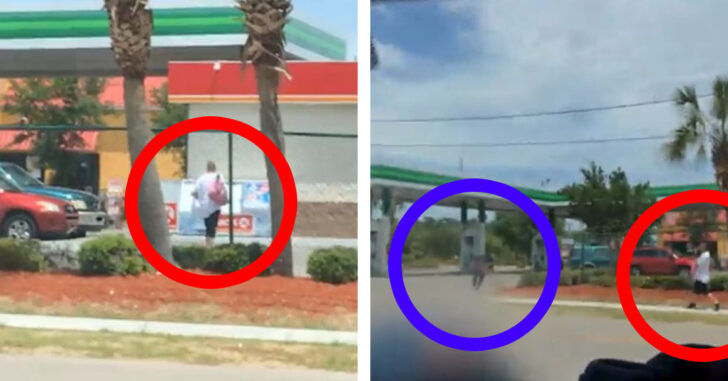 Two people in a vehicle that was parked across the street from a gas station noticed a person acting suspicious, so one of them decided to start filming. A few seconds later, that suspicious person was being followed by what seems to be an employee of the gas station. Then, the suspicious person pulls out a gun and fires two shots at the employee. The employee runs and it does not seem that he was struck with any of the fired shots. Why are we sharing this video? Something was happening to peak the witnesses’ interest, and we’re just placing this here as a reminder to be aware of your surroundings and to trust your gut. If these two witnesses had not been paying attention and were about to walk to the gas station, for example, they could have easily put themselves in harms way if they didn’t pick up on whatever sketchiness was happening. Local media reports that the man in the video has been identified by police.

According to information from the Myrtle Beach Police Department, 40-year-old Ryan Ralston is wanted for attempted murder in reference to the shooting that happened Wednesday afternoon at the Circle K convenience store located at 1405 S. Kings Hwy. Ralston was last seen wearing a white t-shirt with a green logo, dark shorts and black Air Jordan sneakers, according to the MBPD. He was also wearing an orange silicone wrist band on his right wrist and carrying a Victoria’s Secret bag with the word “Love” on it. The suspect is considered armed and dangerous. Anyone with information on his whereabouts is asked to call the MBPD at (843) 918-1382.

The man who took the video was identified as an 18-year-old who was on a lunch break with a co-worker. He noticed the suspect remove a gun from the bag he was carrying and placing it in his waistband. That’s when he hit record.

[The witness] said he and a friend were early to a job and sat in their truck in a parking lot across the street to eat lunch. Before he started filming, [the witness] said he saw the suspect take a gun out of a bag and put it in his waistband. That is when he hit record on his phone.

This witness video will hopefully put the suspect behind bars where he belongs so that he is no longer a danger to society. Being a great witness is an important thing in today’s world and if you see something that looks fishy… trust your gut.
Category: General