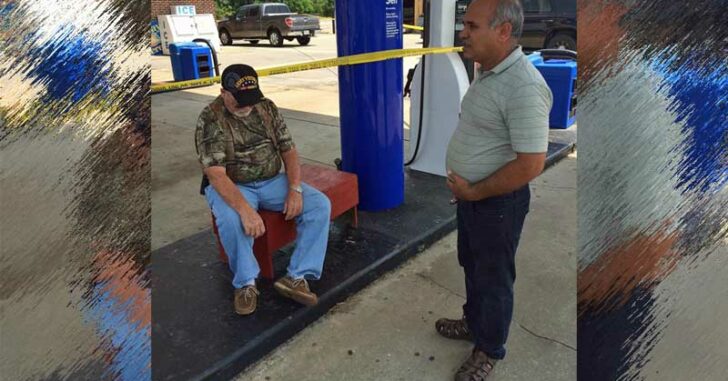 SYCAMORE, GEORGIA — A vietnam veteran was out for a typical day, and walked into a gas station to break a $20. His day changed quickly when a young thug came in with a gun.

The veteran, Don Rogers, is being hailed a hero by the gas station clerk for likely saving his life. “I wish the day could’ve went by without this happening,” said Rogers. “I just did what I had to do.”

“I heard somebody say “put the money in the bag”. So I looked up and I seen this gentleman holding a pistol on the clerk,” said Rogers. The firearm-carrying Rogers was scared, but he knew what he had to do. “And when I did, he looked over at me and turned my way and I fired a shot. And he grabbed his side and then I fired two more shots before he got out the door,” said Rogers.

Rogers hit the suspect, 18-year old Devin Burton, with two of his three shots. Burton ran out of the gas station empty handed and got into a car driven by 17-year old Marleigh Agner. The pair took off but stopped along the way to call 911, as Burton’s wounds were too severe.

“Well, I was hoping nothing like this would ever happen, but I was glad I had my weapon with me,” Rogers said.

Rogers believes that every legal gun owner should carry their firearm with them at all times, and we couldn’t be happier to hear that statement.

“People are just sick of people running them up,” said Turner Co. Sheriff Andy Hester. “And robbing, and stealing, and pillaging, and people are tired of it. These people that’ll go out and do this kind of stuff need to realize- it ain’t always gonna fare to their favor, just because they’re a predator.”

People are sick of this, indeed. While we never want to be forced into a situation where we need to use our firearm, it’s important to remember why we carry in the first place. Like Rogers, we refuse to be victims to these frequent crimes.