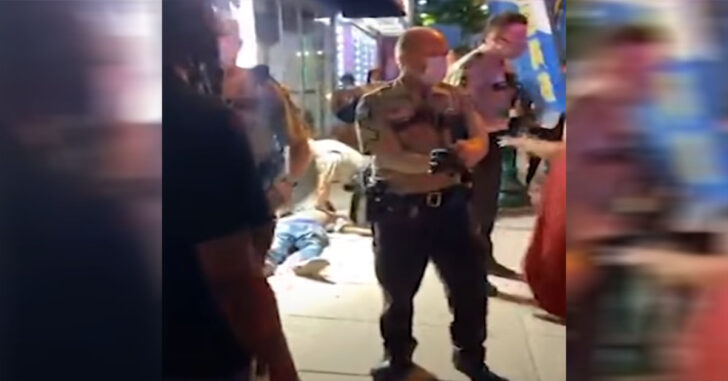 MINNEAPOLIS, MINNESOTA — During the first night of riots on Wednesday, news is circulating that an owner of a pawn shop shot and killed a looter during the night.

Video showing a person on the ground, outside of the pawn shop started circulating, with police performing CPR until the ambulance arrived.

Confusion early on in the video seems to have some spectators believing the police shot the person, however they showed up after the incident occurred and rendered aid.

A second video shows the same chaos, but the person behind the camera stays at the location of the shooting for a longer period of time, and we can hear police tell people to get back because a person is inside the shop with a rifle.

A reporter tweeted that the pawn shop owner was the one who fired the shot, and police said they are working the case and that this is a possible scenario of what happened.

Police are investigating a homicide. They say the owner of a nearby pawn shop shot and killed a person suspected of looting his building.

When these business owners are forced into a situation like this, many have their livelihoods to protect. If the events are accurate, it is almost certain that the pawn shop owner won’t face any charges as a result of the man’s death.

Previous article: Live Feeds Of Riots Across The Country, National Guard Called To Minneapolis Next article: Trump on Twitter: "When The Looting Starts, The Shooting Starts"