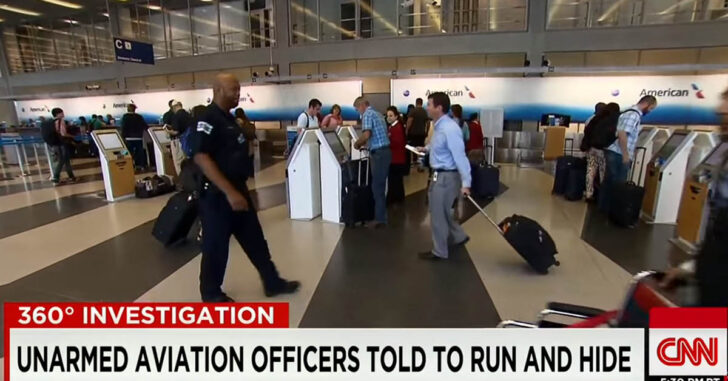 CHICAGO, ILLINOIS — Filed under ‘things we will never understand’, a reader sent us the above news clip that discusses the day in a life of an Aviation Officer at Chicago International Airport.

The recipe: Sworn law enforcement officers who can’t carry firearms and are told to run and hide in the event of an active shooter situation or terrorist attack.

It’s seemingly the only location in the Country where Aviation Officers are unarmed, making it even more ironic since it’s one of the busiest airports in the Country.

Aviation Officers at the airport are trained just as Chicago Police are, meaning they are also sworn officers, and all they want is to be allowed to carry a firearm just as any other law enforcement officer does.

So in the event of any type of attack at either of Chicago’s airports, 300 Aviation Officers would be defenseless. That’s just not right.

Two of these Aviation Officers spoke with CNN in silhouette because they feared they would lose their jobs after speaking out. They tell the reporter that their training instructs them to run and hide because after all, what else are they left to do when unarmed?

In one of the training videos, the instructions are perfectly clear, stating; “If evacuation is not possible, you should find a place to hide where the active shooter is less likely to find you. Block entry to your hiding place and block the doors.”

If a serious event occurs, Aviation Officers must wait for Chicago Police to arrive in order to help control the situation. It’s a unique setup that isn’t found at any other airports in the Country.

When the reporter went to speak with Richard Edgeworth about the policy, who is the Chief Safety and Security Officer for the Chicago Department of Aviation, he did the same thing that he tells his Aviation Officers to do in the face of an armed threat: Run and Hide.