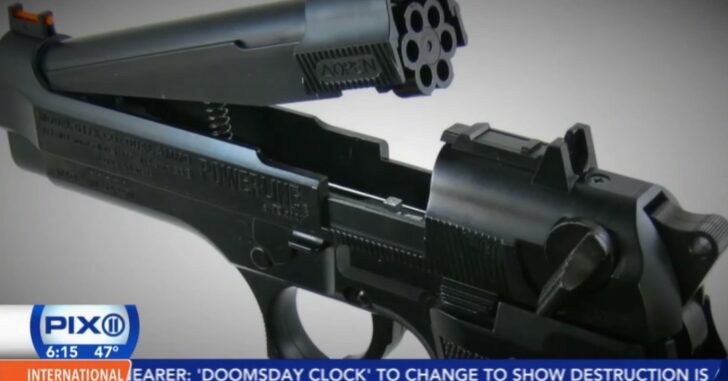 “[New Jersey comic and actor] Carlo Bellario was filming scenes for an independent film in a residential neighborhood in November in a role he took on for free and the chance to be entered in the Internet Movie Database,” foxnews.com reports. “His character was a drug dealer’s bodyguard, and Bellario toted a realistic-looking airsoft gun that was meant to fool big screen viewers one day.” Guess who turned out to be the fool when neighbors called 911? “As an actor, I’m not required to make sure that the producer has all the proper permits,” Bellario says. Nice try. And for his trouble . . .

Bellario was handcuffed, arrested and charged with weapons possession under New Jersey’s strict gun laws, which say any weapon that fires projectile – even if it is just a pellet – is a firearm . . .

He did a four-day stint in the Middlesex County Jail, where he was held on $10,000 bail. The movie’s producers backed out of their promise to pay his bond, he said . . .

The trip to the lockup was just the beginning. Until his court situation in resolved, he is not allowed to leave the state, he said.

“That means I can’t go on the road for comedy gigs,” he said. “I can’t earn any money.”

Bellario is still trying to raise money for his legal fees. He started Go Fund Me page, where he has raised nearly $4,000. Facing up to five [ED: ten] years in prison, Bellario also says that he is also having trouble finding a lawyer willing to take on his case and hopes that someone is willing to work pro bono.

“No one wants to touch it for less than $10,000,” he said referring to his search for legal representation.

What criminal intent is involved here? Exactly none.

New Jersey Governor Chris Christie is no longer running for President. He no longer needs to bolster his pro-gun creds by pardoning more Americans whose only crime was exercising their natural, civil and Constitutionally protected right to keep and bear arms in a state that refuses to recognize same. So, will he pardon Mr. Bellario?

Otherwise, Mr. Bellario will be generating new material from behind bars. For years. And his gun rights will be gone forever. All the more reason Congress needs to wait until after a Republican president assumes office before approving a Supreme Court nominee. Know what I mean?