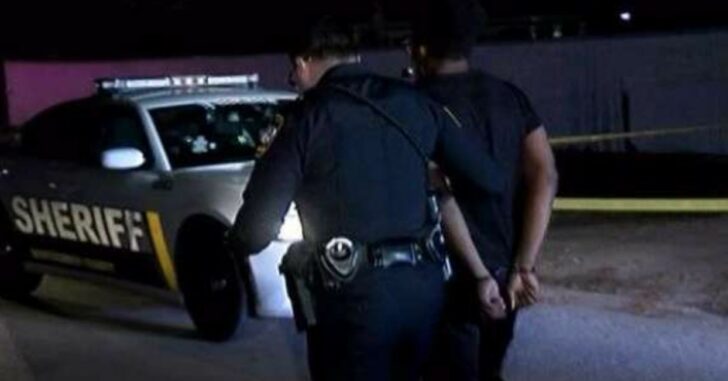 NEW CANEY, TEXAS – A man who was house sitting for a friend fatally shot another man outside the home after allegedly being threatened with a hammer.  Montgomery County Sheriff’s deputies responded to a 911 call from the 23700 block of Panky Lane around 9:45 on December 9th.

Upon arrival, the caller told officers that he was house sitting when he heard loud banging in the rear of the home. Going back to investigate, he exited the rear of the house and saw an unknown man holding a hammer.  He stated that the man charged him, and he pulled his handgun and fired at the man’s chest multiple times. He then called 911 immediately following the shooting.

Paramedics arrived and began treating the man for life-threatening injuries, but he died at the scene. Video shot at the scene showed an officer walking a man, apparently handcuffed, between patrol vehicles. The case remains under investigation, and no names have been released.

While the instinct may be to go outside and investigate noises and potential threats, it is often better to remain inside the structure, ready to defend home and self should an intruder attempt entry.

The justification for self-defense becomes much clearer from a legal standpoint if there is evidence that a forced illegal entry attempt was being made. With no apparent witnesses, if there is no private surveillance video of the incident to substantiate the man’s self-defense claim, it is up to investigators, the district attorney and possibly a grand jury to determine if the story is believable.

Previous article: What Should You Do If The ATF Comes Knocking On Your Door - Polymer80 Customer List Reportedly Confiscated Next article: Two Paramedics Shot By Suspect During Call, One Paramedic Is Armed And Returns Fire, Shooting And Killing Suspect