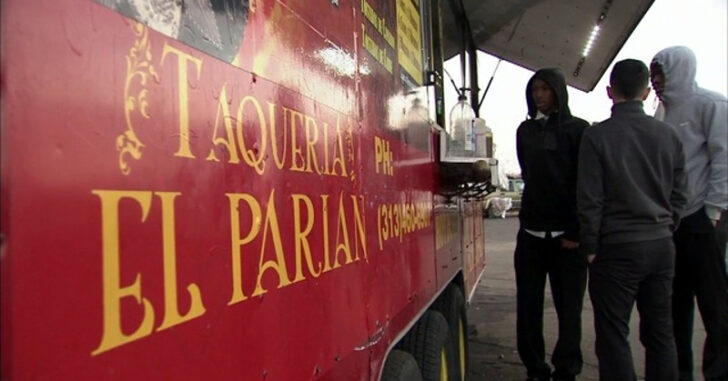 DETROIT, MICHIGAN — A little section of the big city of Detroit known as Mexican Town has been plagued for years by armed robbers, threatening food truck vendors, bar owners, and customers alike.  Well, finally enough was enough.  One thug jumped up and demanded money from a local bar owner according to witness reports through FOX 2.  When the bar owner argued with him about it, the thug shot him in the leg.  Bad mistake.  The bar owner was also a concealed handgun license holder.  He got out his gun and returned fire multiple times.  The thug’s buddies, seeing how he’s teetering into critical condition, hauled him out.  They dumped him off at the Detroit Receiving Hospital where he was then treated and taken into custody.

A security guard, while patrolling the area, happened to spot the make, model, and license plates of the getaway vehicle.  He phoned in that information to authorities who were able to track down one of the suspects that owned the car in Clinton Township.

The third suspect involved with the case managed to get away.

This is the reality of concealed carry.  It’s not always the ideal conditions and it doesn’t always mean getting away without a scratch.  This brave business owner stood up to thugs who had been plaguing Mexican Town like a bad case of food poisoning.  What would the world look like if more people did the same?

One CPL holder standing up to armed robbers isn’t going to change the tide, but it will set a precedent.  When armed citizens are no longer afraid of bullies with illegally-obtained guns, criminals will either get wise and get out or get shot.