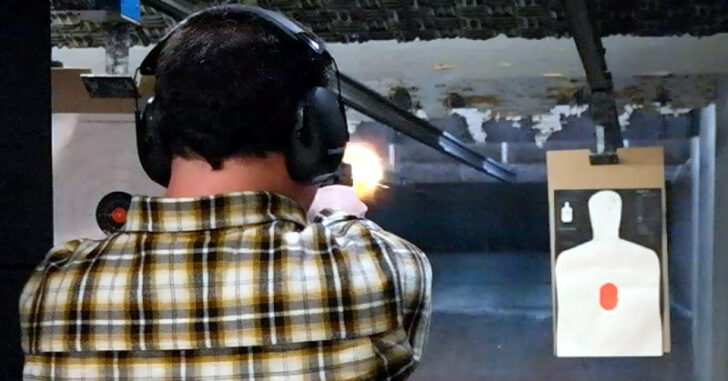 Recently we got a Facebook message from an avid reader who wanted to know our reasoning behind the idea of always aiming for center mass.  The reader said that one of his relatives didn’t understand why limb shots or head shots wouldn’t be preferable to a center mass shot.  The rationale is understandable — the potential concealed carrier is looking to not take life and simply incapacitate his target.

Along the medial line (also called the midline) of the human body, we see the main components of a person’s central nervous system, respiratory, digestive, and cardiovascular system.  The core pieces — the heart, lungs, spine, liver, and kidneys are all placed directly to the left or right of that midline.

We’ve included a graphic to help illustrate this. In a defensive situation, if you can aim for the middle of the target, you have the greatest chance of the bullet landing somewhere in vicinity of these systems.  Any direct hit to the heart, lungs, liver, or spine will likely result in the target being seriously incapacitated or killed.

That supports the idea that self-defense may involve the use of deadly force.  If you’re not prepared to use deadly force to protect yourself, a firearm isn’t going to be helpful.

The area we’ve highlighted on the anatomy model is for reference of scale.  The surface area of that target is larger than the exposed surface area of an arm, leg, or even head.  That means there’s more space to fit a bullet inside.  Firing for center mass allows for inaccuracy.  If the shooter’s hand is shaking or the shooter is firing from an unsupported position, straying from the medial line by up to 3 inches on either side will still result in a critical impact.

If you took that same line and traced it down the middle of an arm or leg, it’s possible that a shot that is off from the center by up to three inches will be a complete miss.

Unfortunately, one bullet doesn’t guarantee success.  When shot, the human body immediately seizes and stops due to a precipitous drop in blood pressure, cardiac arrest, and/or severe damage to the spinal column/central nervous system.  And even this can be some measurable amount greater than 0 seconds.  This is also why we aim center mass — we never anticipate one bullet will result in immediate cessation of hostilities.  That said, if one round appears to incapacitate your opponent, you are obliged to cease hostilities.

Gunshot wounds that penetrate cardiac tissue or the arteries leading into the heart will cause it to stop pumping blood.  This is perhaps the most severe and immediate injury a person can sustain outside of a clean headshot through the top of the spinal cord.  Death is usually followed immediately unless extremely skilled medical personnel are on stand-by — and even then it’s a long shot.

Shots that result in a large displacement of bodily tissues within this center mass area can lead to a sharp drop in blood pressure.  When blood pressure drops suddenly, a hostile target will lose consciousness.  If not treated quickly, death will likely occur within minutes.

And lastly, if the respiratory system is struck by bullets, the person cannot breathe.  Divorced from oxygen, the body is running off whatever oxygen is left remaining in its blood supply.  When oxygen levels drop, a number of very sharp, precipitous chemical reactions occur in the blood stream and the person becomes unconscious.

Vital organs like the liver and kidneys do not have the near-instantaneous results typically found in shots registered into the spinal column and heart but they will definitely incapacitate your foe in short order.  If left untreated, those injuries will be fatal in the near-term.

The Unpleasant Business Of Defensive Gun Use

Detailing out this information isn’t meant to gross out anyone or make them feel confident.  It’s meant as a reality check to the rationale of shooting center mass.  It’s also why we stress the importance of responsible gun use for concealed carriers.  There is a lot of responsibility in your hands the second you wear a firearm every day.  That responsibility ought be measured and metered against the knowledge that there’s no such thing as an idle shot.

A well-placed shot center mass has the greatest capacity to stop hostilities.  It is always our hope that nobody need lose his life in a gunfight.  If anyone does, though, let it be your attacker and not yourself.

Hopefully this knowledge helped educate our community and, if applied, serves somebody well in self-defense training.