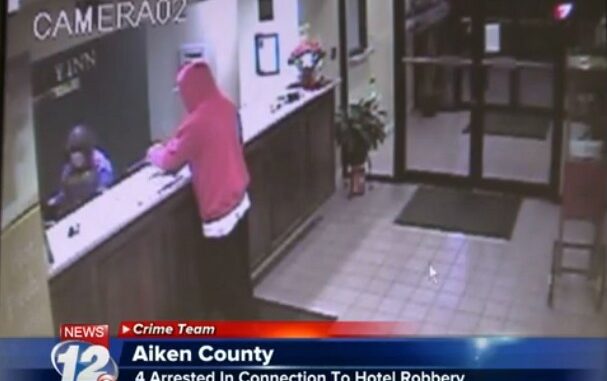 Remember folks, it’s all about firearm safety. Luckily for society, this Darwin Award nominee doesn’t know the first thing about any of the rules.

Four people who thought that they were really clever during a string of robberies in South Carolina found their weakest link; 27-year-old David Dempsey. The other three involved in the robberies were 19 year old Autumn Cooper, 21 year old Breanna Dudley, and 25 year old Bradley Parrish.

With the other three apparently waiting in the car, Dempsey walks into an Aiken County hotel and demands money from the lobby employee. The employee, Pat Coats, feared for her life after seeing that Dempsey had a gun. She handed over about $300 and then Dempsey starts walking toward the door when his gun goes off, shooting himself in the leg.

After Coats called police, they were on their way to the scene when they were flagged down by the four crooks because Dempsey needed medical attention. Police quickly put two and two together and arrested the group of idiots.

“I’m glad they got caught because I think too often people get away with that sort of thing and it enables them to go out and do it again,” said Coats.