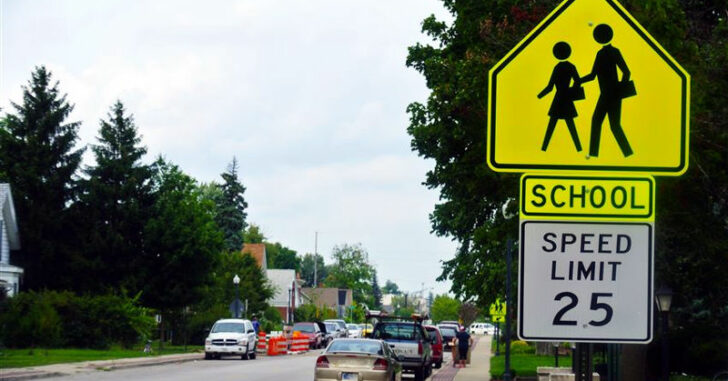 Part 1 of this article will deal with the federal law and part 2 will cover our recommendations to answer the following question:

“What should I do if I’m driving through a gun free zone?”

School Zone — The area of 1,000 feet around a public, parochial or private school.

This includes roadways, highways, and any ground not considered private property.  We’ll get into the exceptions.

A school is defined as any state-defined location providing elementary and secondary education.  This covers the arena, in most states, of grades K through 12.  Some states will include pre-school and daycare in this caveat.

Exceptions To Possessing A Firearm In A School Zone

When looking into the big exceptions for possession a firearm within a school zone, we see the following in 18 U.S.C. § 922(q)(2)(A)

(i) on private property not part of school grounds;

This could be interpreted that if you’re on your own private property and you have a firearm in your possession, you are legally allowed to possess that firearm.  It has been argued and extended in some cases that if you are in possession of a firearm on someone else’s private property and you are the guest of that person or entity, you’re also good.

If you live in a state that allows you to carry onto school premises through either a concealed handgun license or similar, you are allowed to go onto school grounds with that firearm.  Constitutional carry would not regularly apply in this scenario.

(II) in a locked container, or a locked firearms rack that is on a motor vehicle;

If you’re legally allowed to possess a firearm but not legally allowed to carry it onto school grounds, you’re still allowed to have it within your vehicle so long as it is unloaded and in a locked container — much the same as the rules that apply for interstate travel clauses for FOPA.

(iv) by an individual for use in a program approved by a school in the school zone;

Lumped these next two for obvious reasons.  They all apply to people contracted to work with the schools for sporting events and athletic meets centered around firearms.  Activities such as athletic shooting sports and the like require instructors, coaches, and others to regularly transport firearms onto and off campus.  So long as it is for an approved and sanctioned activity by the school, you should be good to go.  It’s always best to transport in a locked container, unloaded, and maintain a copy of the school administration’s contract for the activities.

(vi) by a law enforcement officer acting in his or her official capacity; or

Obviously, if you’re an active duty police officer or agent of law enforcement, you’re generally allowed to go just about anywhere you want with your firearm.  One of the rare perks about that job.  When it comes to retired or off-duty police not acting in an official capacity, it’s best to acknowledge that you’re not authorized to carry into a school zone unless specifically authorized by the administration or applicable state law.

(vii) that is unloaded and is possessed by an individual while traversing school premises for the purpose of gaining access to public or private lands open to hunting, if the entry on school premises is authorized by school authorities.

For those that frequently hunt, if you’re operating within or through 1,000 feet of a federally-identified school zone, you’re obliged to obtain permission by school authorities first.

So, in conclusion, unless you have a concealed carry handgun license or permit that allows you to possess a firearm on school grounds, make sure it’s locked up and unloaded before you step out of the car.  Else, try to obtain specific permission from school authorities.

Part 2 – “What Should I Do If I’m Driving Through A School Zone?”

If your state (or the state you’re driving in) does not allow concealed carry in school zones then the 1,000 foot perimeter is enforced while on the property of the school and while traveling any road provided by taxpayer money.  So if you’re traveling a public road, pull over, unload your firearm and lock it in the glovebox (or similar) until you drive past the radius of 1,000 feet.

After you have passed through the school zone, you may pull over, load your handgun, and put it back in your inside the waistband concealed carry holster.

That’s our recommendation based upon our interpretation of federal law, however we are not lawyers. It is your responsibility to know the laws in your state, and consulting with an attorney versed in your state’s laws to determine the best possible course of action is always the best thing to do.