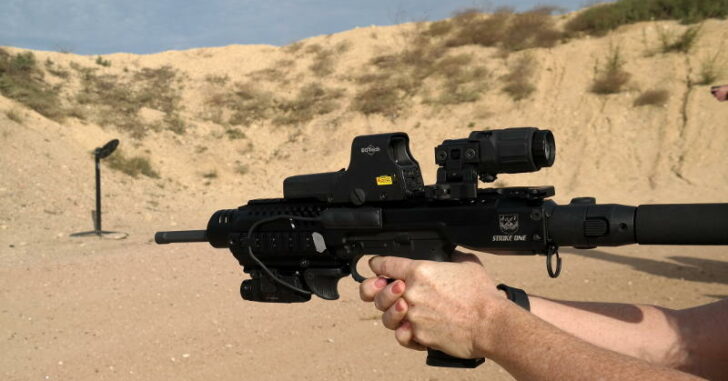 This past week we’ve been in Austin, Texas, getting to meet with gun and equipment manufacturers.  Can’t lie — it’s pretty fun getting to see what’s coming down the pike in the firearms industry.  One of the interesting firearm systems that caught my eye was the Arsenal Firearms Strike One Pistol equipped with the Long Range Conversion Kit (LRC-2).  Not exactly what I’d consider a “concealed carry” pistol, the Strike One pistol looks more like a streamlined competition shooter.  I got the opportunity to check it out at the range in both its natural state and in “beast mode” — equipped into the LRC-2 kit. With an EOS red dot system and flashlight, it’s practically “cheat mode” for home defense applications.  Not like a 9mm has much recoil in the first place, but when placed into the LRC-2 kit, the only thing I had to get used to was the added weight. The assembly process to kick off the LRC-2 is a bit of a trip.  It starts by taking a regular semi-automatic Strike One (AF-1) pistol and then inserting it into a larger kit with an in-line barrel and a locking system to flush it up with its bigger components.  Once the pistol is in there, though, it’s hard to imagine it was ever a separate part.

The AF-1 Strike One has an extremely smooth trigger action and almost no jump.  When inside the LRC-2, it seriously becomes a whole different sort of monster.  This is one of those ideal platforms for moving room to room in a house or about the property.  At 7 yards, it was nearly impossible to miss with EOS red dot sights.  A couple guys at the next door rifle range seemed curious whether or not the EOS red dot would blot out a steel target at 100 yards.  I wasn’t sure if it would come up until I saw one of the guys from Crossbreed Holsters pick up a Canik pistol and peg iron targets at 100 yards like it wasn’t anything.  Looking downrange at the 100 yard steel circle, I thought the point may be valid.

In either case, the LRC-2 conversion kit is definitely designed to be a great home defense option.  For those that like to carry full-size and want the option to upgrade into a hardcore long range semiautomatic pistol system with a single click, Arsenal Firearms definitely had them in mind. Yep, the LRC-2 even has a charging handle.  So, if you want to keep it in this advanced pistol state, change magazines, and continue to operate — it’s right there with you.

The only thing I hit a wall against is the idea that I could see myself using the Strike One as my daily carry and then switch it into “beast mode” LRC-2.  That’s not something I could see myself doing.  It was terribly fun to shoot.  It’s the epitome of the American idea, “let’s make it… But bigger.”

And that’s no surprise coming from Arsenal Firearms.  They made the AF2011 Dueller (aka “the twin .45 ACP cannon”). Yup.  No need for practicality when you crash the party with overwhelming firepower.

Previous article: Naked Burglar Chased Out Of Bed By Armed Homeowner: Yes, You Read That Correctly Next article: #DIGTHERIG - Kevin and his H&K VP9