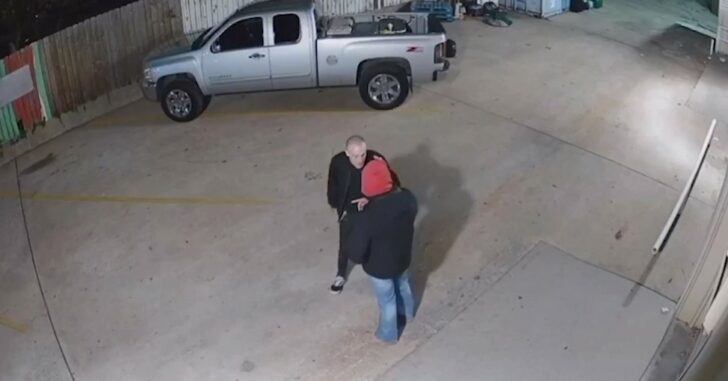 WICHITA FALLS,  TEXAS – A concealed carrier reporting for work in the pre-dawn hours of Tuesday was confronted by a man which led to fisticuffs, the bad guy pulling a knife and the good guy drawing his pistol. Witchita Falls Police received a call just before 5 a.m. from the intended victim who told them that he was holding a suspect at gunpoint.

When WFPD officers arrived, they took the suspect into custody.  The caller told them that he arrived at his workplace around 4:45 a.m. and saw a man in the alley on the north side of the meat market and told him to leave the property. Instead of complying, the man approached him and the two became involved in a fist fight, in which the employee got the better of the trespasser.  At that point, the thug pulled a knife which led the victim to draw his pistol and hold the knife-wielding assailant at gunpoint until police arrived

A witness and the surveillance video from the business collaborated the man’s account. Police didn’t have any difficulty in identifying Jeffrey Sweatt, 43, of Archer City, as there were plenty of mugshots for reference. Sweatt had 23 previous arrests and 19 convictions including burglaries, unlawful weapon and injury to an elderly person. He is now charged with aggravated assault with a deadly weapon and 2 counts of possessing a prohibited substance in jail.

The surveillance video can be seen below:

Let’s look at this incident beginning with the initial contact. It is always best to avoid a confrontation if at all possible. Rather than telling the individual to leave, the employee could have called police with a description of the man and let them take care of ordering / removing him from the private property of his employer. Had he employee done this, there is a very high probability that the incident would not have occurred.

Making contact with an individual, either verbally or often just eye contact, often causes them to engage you when they wouldn’t have otherwise. Unfortunately in this case, the employee drew attention to himself and caused the trespasser to approach him and enter his personal space. Worse yet, he became involved in a fist fight with him. This has the potential to end badly and can result in the defender being seriously injured or killed.

Physical contact also provides an opportunity for a concealed carrier’s gun to be dropped or taken away during any kind of struggle. It is not unheard of for someone to take a firearm from the owner and use it to seriously wound or kill them with their own gun. The importance of a quality holster with proven attachment points, firearm retention and trigger protection cannot be overstated.

In this incident, the attacker was almost within arm’s reach of the intended victim when he opened the folding knife, and it took the concealed carrier around 2 ½ seconds to draw his pistol from the 5 o’clock position and chamber a round. He then holds the gun with one hand at his side with the muzzle pointed at the ground and fails to put space between himself and the knife-wielding attacker.

The need to chamber a round in a defensive handgun after the draw puts the carrier at a huge disadvantage. It takes precious time, requires two hands, and if not done perfectly can result in a misfeed or misfire. If the carrier is not well-trained and well-practiced in clearing a malfunctioning semi-auto pistol under duress, it can prove disastrous and even fatal.

Taking several steps away from the attacker is wise for several reasons. First, it puts two critical factors between the defender and the knife bearer…space and time. Backing away creates a safety zone outside of the immediate reach of the attacker, and requires that he move deliberately toward the armed defender, which undeniably signals that he is a lethal threat and must be met with deadly force.

By remaining close, keeping his firearm at his side, and squaring off with the bad guy, the carrier also leaves the front of his body (and his vital organs) wide open for a lunge or slash by the attacker who is still only a few feet away.

Even though he is armed, he continues to put himself at unnecessary risk by letting the bad guy walk away and pick up a bag, which could have held additional weapons, all the while following him and staying within arms reach (and harm’s reach) for much of the remainder of the encounter.

The simple fact that you may be armed does not make you Superman…there are simply too many things that can go wrong when someone with a lethal weapon is still within arms reach of you. A firearm is only part of a personal defensive system that also requires knowledge, training and common sense.

Previous article: Shoulder Holster Believed To Be Contributing Factor In Fatal, Negligent Self-Inflicted Gunshot Next article: Armed Driver Shoots Armed Carjacker, Who Is Then Run Over By Passing Vehicle As He Lay On The Street